Native Americans: A Guide to Addiction and Recovery

American Indians and Alaska Natives (AI/AN) comprise only 1.7% of the population, but they are at increased risk of drug and alcohol abuse compared with other races.1 Although alcohol is the most frequently abused substance in this community, illicit drug use is also on the rise, especially among Native American youth.2 Substance abuse contributes to health, economic, and social disparities in this group.

This population may have difficulty accessing addiction treatment – particularly if they live on reservations. But rehab options exist, and recovery programs are increasingly incorporating elements of Native American culture.

Which Drugs Are Most Often Abused by This Group?

Statistically, alcohol appears to be the most widely abused substance among Native Americans. However, illicit drug use is also common within these communities. According to the 2015 National Survey on Drug Use and Health, the lifetime use of illicit substances among American Indians and Alaska Natives aged 12 and older was 54%; nearly 23% of AI/AN ages 12 and older used illegal drugs in the past year.3

According to the Substance Abuse and Mental Health Services Administration (SAMHSA), Native American adolescents have the highest rates of marijuana use, painkiller abuse, and abuse of psychotherapeutic drugs compared to the national average.4

Some of the most common types of drugs abused by Native Americans include: 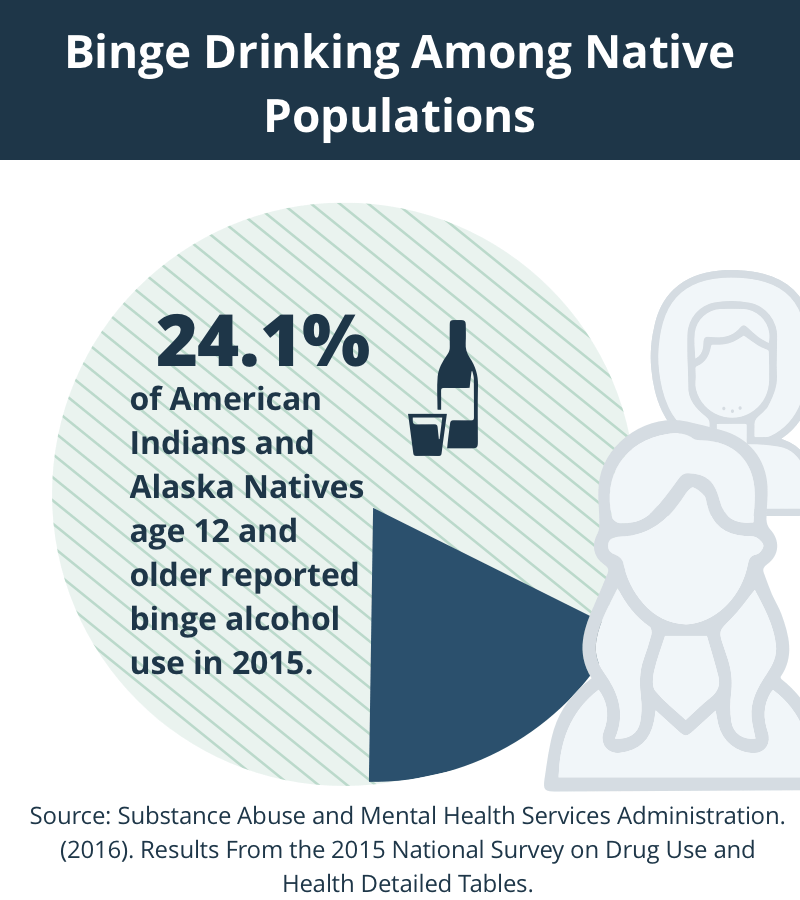 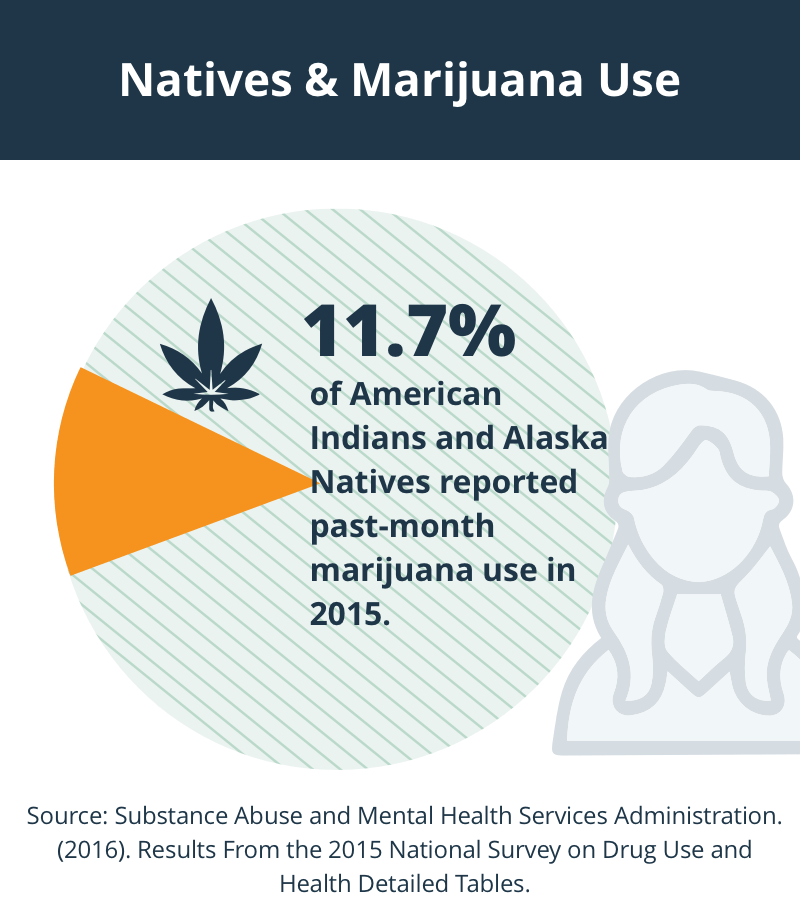 What Are the Effects of Drug Abuse on Native Americans?

What Are the Causes of Addiction in Native Americans?

Risk factors for addiction among Native Americans include the following:

How Can You Tell if Someone Has a Problem?

Many Native Americans – and Americans in general – may be unaware of the signs and symptoms of drug or alcohol abuse, which may prevent them from recognizing the problem and getting help. The general signs of addiction include the following:14 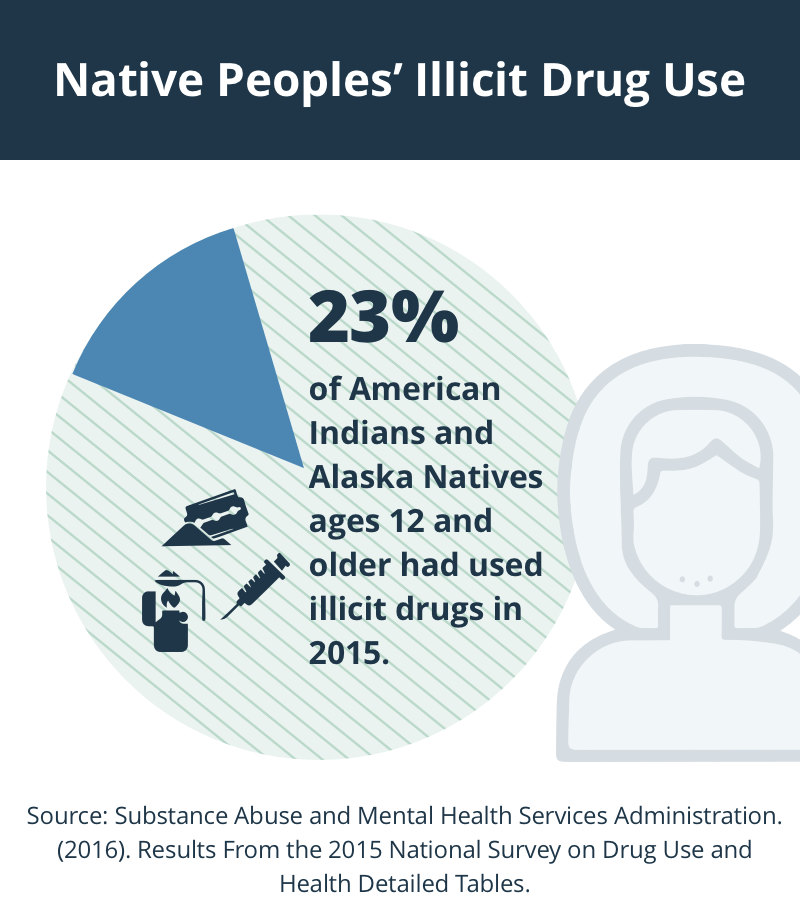 What Are the Barriers to Treatment for Native Americans and Alaska Natives?

Barriers to alcoholism and drug abuse treatment for Native Americans include the following:15

Previous attempts to bring substance abuse treatment into these communities have not succeeded in addressing their specific cultural needs. Clinicians, clinical programs, tribes, and the Indian Health Service (IHS) have all worked to develop new treatment approaches, but these services are severely underfunded. Many communities remain without necessary substance abuse treatment programs.16

Additionally, due to their history of oppression and mistreatment, many AI/AN communities are reluctant to seek care from westernized medical institutions. Many question medical treatment and prefer to rely on traditional indigenous medical practices.15

What Kinds of Rehab Programs Are Available?

Native American rehab and recovery options vary widely depending on where the person lives and what type of medical coverage they have. Many reservations do not have adequate treatment programs for either mental illness or substance abuse disorders. However, a few of the wealthier tribes have excellent substance abuse treatment centers. Treatment options could include the following:

How to Find Programs Familiar with Native American Culture 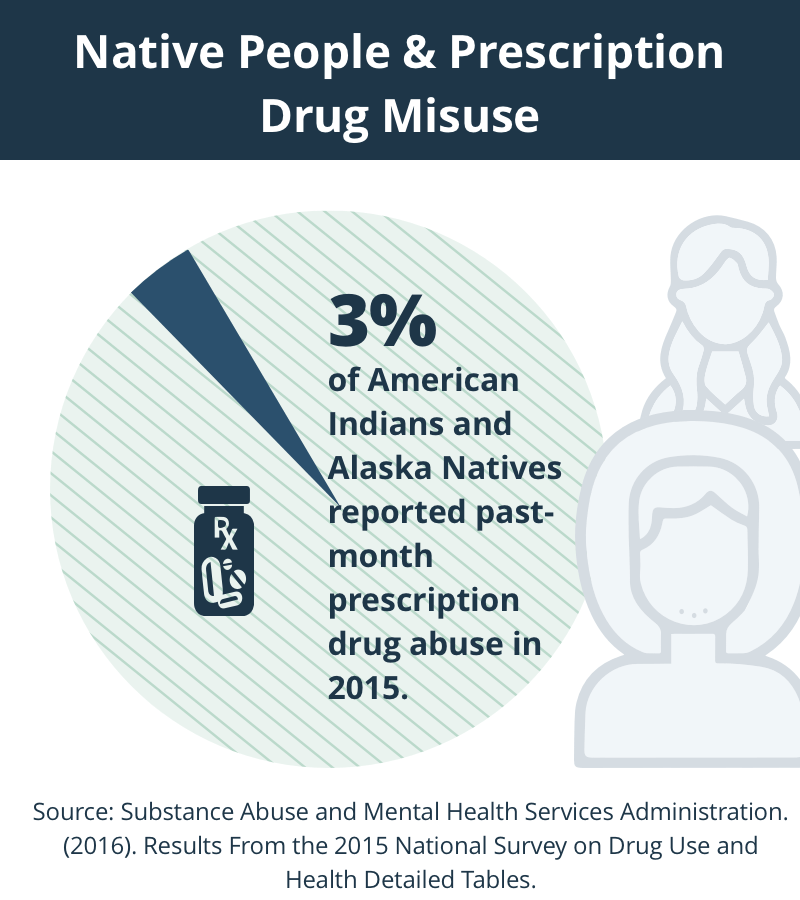 Health care providers in major city hospitals usually undergo training in cultural competency because they interact with such a diverse group of patients. This is not necessarily the case in certain parts of the country, particularly rural areas unaccustomed to Native peoples. Tips for finding a respectful treatment program include the following:

No single addiction treatment approach works best for everyone. Some people benefit from seeking treatment along with their peer groups. Native American teenagers might, for example, prefer to seek treatment with other teenagers rather than older indigenous people. Women may benefit from single-gender facilities that allow them to open up and share their cross-cultural experiences.

How Are Traditional Healing Practices Being Incorporated into Treatment?

In some cases, evidence-based treatments, such as cognitive-behavioral therapy (CBT) and motivational interviewing, have been combined with traditional healing practices in drug rehab programs for Native Americans.16,17

The problem for clinicians is how to engage these city dwellers in traditional healing practices. Some traditional practices that clinicians have tried combining with evidence-based treatments in urban settings include sweat lodges, powwows, and consultations with tribal leaders.17 In reservation settings, other cultural traditions are being used, such as hunting, berry picking, steam baths, wood gathering, fishing, tundra walks, and craft activities.17

What Are Some Ways to Pay for Treatment?

If you have insurance through your job, your provider might cover some or all of your substance abuse treatment. Check to make sure the provider you want to see accepts your insurance. Many programs offer flexible payment plans or sliding scale fees, and scholarships might be available to some people.

If you don’t have insurance or can’t afford to pay out of pocket, then you may need to seek other free and low-cost treatment options. You may consider seeking alternative funding sources, such as raising money from your community or starting an online crowdfunding campaign. Turn to your community leaders for advice on how to proceed. They may have valuable suggestions of where to find the best treatment.

The resources listed below can connect you with treatment providers and help you find out if you are eligible for public health insurance.