A Guide to Addiction and Recovery for Veterans

The trauma of combat, the physical pain of injuries, and the sense of disconnect in civilian life may lead many veterans to develop addiction. Many veterans are unwilling or unable to reach out for help due to a culture of toughness and a fear of discrimination, but treatment can provide veterans with hope and healing and it can help them begin working on their recovery.

Treatment can be inpatient or outpatient, depending on a veteran’s particular needs. It can consist of therapies that help the person manage cravings for drugs or alcohol and deal with mental health conditions such as PTSD.

What Causes Addiction in Veterans?

Those at greatest risk for the development of substance abuse problems are active military and veterans with multiple deployments, combat exposure, and injuries. Veterans can develop dependence on opioid pain medications given the serious nature of some of their injuries.7

Some common contributing causes of addiction in veterans are listed below.

Post-traumatic stress disorder (PTSD) involves exposure to a traumatic event. Symptoms may include re-experiencing the event, avoidance of triggers, and hyper-arousal (fight-or-flight response). PTSD can increase the chances of developing an addiction because veterans may use alcohol and drugs to relieve the symptoms. 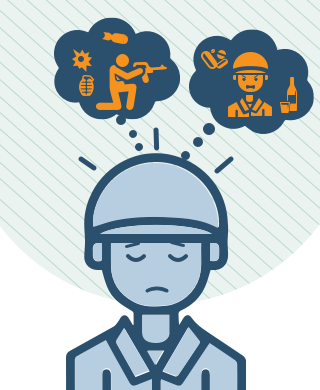 Deployed soldiers with combat experiences such as witnessing the death of a comrade, physical torture, and prolonged threat of death and injury are more vulnerable to PTSD compared with deployed soldiers without combat exposure, with one study claiming a 3-fold incidence of PTSD in the former.2

Veterans Diagnosed With PTSD and Addiction

Sexual assault creates several kinds of pain. In addition to the trauma of the event, there is also the fear of bullying and rejection if the crime is reported.

Victims may feel that they will be perceived as weak in a culture that emphasizes strength, and they simply put up with the distress. Symptoms often worsen over time, so many military men and women may use drugs or alcohol to relieve the emotional pain.2

Female veterans report sexual assault or harassment at a rate of 10% to 30%, compared to 1% of male veterans.19 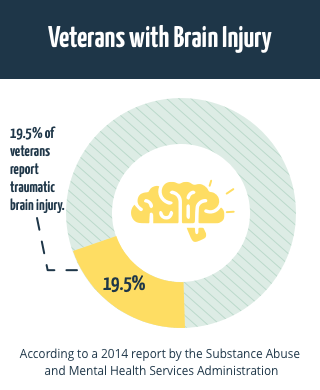 The source of TBI for the majority of soldiers is a blast incident such as an improvised explosive device (IED). A RAND Corporation study of returning veterans found that 19.5% reported a probable TBI during deployment.4

Alcohol and drug use are known to increase the likelihood of TBI, but the reverse is also true for active-duty combatants. TBI increases the likelihood of problems with control and decision-making. Deficits in this area of the brain are associated with the development of addiction.2

Men and women in military service are particularly vulnerable to dependence on and addiction to opioid drugs due to equipment-related or combat-related injuries.

Needing to maintain fitness for military service and not wanting to be left behind in the field, many of them “just suck it up” and don’t give the injury time to heal. This increases the need for more and more of the drug.

Alcohol Use During and After Deployment

Workplace culture in the military can be a risk factor for developing addiction. The culture allows heavy drinking and binge drinking, which increases overall consumption.5 Drug use has decreased with random drug testing begun in 1981, but binge drinking has increased. The military is trying to change this culture.18

Among military personnel, there is growing evidence linking combat stress and alcoholism. U.S. Reserve and National Guard personnel who have been exposed to combat in Iraq and Afghanistan are at higher risk of developing problems with alcohol.5

A soldier can be in combat today and tomorrow be released into civilian life without a job. Many have trouble reintegrating back into society. They have spent years, even decades, assimilating into military culture, and it can be hard to make the shift into a less structured environment.

The lack of shared experience and understanding can create a divide between civilians and veterans. Veterans may turn to alcohol and drugs to cope with the isolation they feel.6

How Does Addiction Affect Those in the Military?

Addiction has numerous physical, psychological, and social consequences.It’s not just about dependence on a drug but also how drug use affects family, relationships, and physical and mental health. 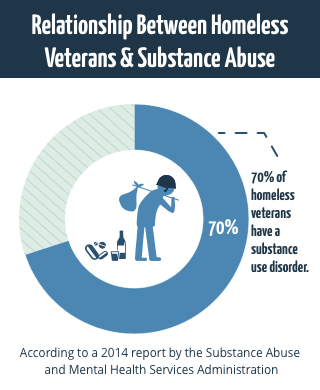 What Are the Signs of Addiction and Mental Health Disorders?

Signs of addiction in veterans include:16

Common signs of PTSD, following exposure to one or more traumatic events, include:16 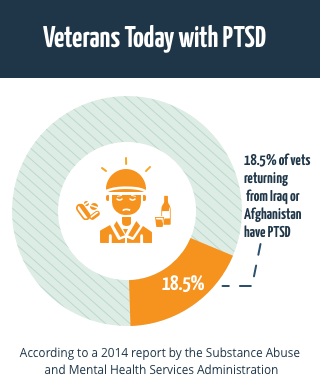 Symptoms of depression include:16

Depression is more common in women than in men.16 About 2% to 15% of individuals with this disorder die from suicide. Those most at risk include people who are hopeless about the future, those just discharged from the hospital, and those who have a family history of suicide.39

How Can They Overcome Stigma and Get Help?

A significant number of military personnel, veterans, and their families seek help from community and state services rather than through the Department of Defense because of the stigma or lack of confidentiality attached to seeking help within the system. Many veterans believe that mental health or addiction treatment may impact their careers or the careers of their spouses.1

They may also be concerned that a diagnosis of substance abuse or PTSD will lead to stereotypes and problems finding employment, or they may not understand the types of treatment available or how treatment works. Some may simply think that they can take care of themselves or they will get better without help.

Given that addiction is a progressive illness, the cost of not seeking help can have a devastating impact on a veteran’s family and employment, as well as on their own physical and psychological health. Even though it takes a lot of courage to face combat, sometimes the greatest obstacle an addicted veteran may have to face is being able to admit that they have a problem and seek help.

What Treatment Approaches Are Used for Veterans?

There is now wider understanding of the high incidence of trauma in both men and women in treatment for substance use disorders. This has resulted in the integration of trauma-informed care into addiction treatment.

A number of medications are used to treat alcoholism. They include the following:

Medication-assisted treatment (MAT) for addiction to opioids such as heroin or oxycodone includes the following medications, which are often combined with behavioral therapies:

Antidepressants are medications shown to be effective for the treatment of depression, and many of them have been shown to help reduce anxiety as well. They are not addictive substances, but they can have some uncomfortable side effects. Talk to a physician if you feel that a particular medication is not agreeing with you.

What Kinds of Programs Are Available?

How Do You Find a Program?

VA wait times for service can be extensive, and there is still a stigma in some areas around drug addiction/substance use disorder. Fear of discrimination and perceived confidentiality issues may prevent some veterans from seeking treatment.

Care is available in the private medical sector. Check with local providers about cost and insurance coverage. Outpatient programs are also available, and many programs will help through Medicaid or set up a payment plan.

In areas where there is not a VA facility within a reasonable distance, you may be able to seek private sector care, covered by the VA or by your employer.29

How Can You Stay Sober After Rehab?

Although some people with addiction are able to achieve long-term recovery after treatment without any assistance, for many people addiction is characterized by periods of being clean followed by relapse and re-entry into treatment.

Self-help programs such as AA and NA are widely available in large and small communities, and people can attend for extended periods. These programs provide a supportive social network of people who do not use drugs, and they explicitly discourage drug use.35

Sober living homes or halfway houses are another aftercare option for people who are not ready to return to their living environment. The person lives with other people who have completed a rehab program and participates in recovery activities, such as attending support groups, looking for a job, or finding housing.

What Help Is Available for Families?

Addiction is a “family disease.” When one family member is addicted, other family members may adjust to the addiction through anger, disappointment, silence, workaholism, or fear.36

Rehab programs for veterans may offer the following options for family members:

Most people are “coaxed” into treatment because of legal, family, or medical problems. In situations where family members feel helpless about getting through to their loved one, an intervention may be warranted. This is a professionally planned process in which family members lovingly yet firmly speak to the addicted family member about how addiction has affected them.36

Resources and Hotlines For Veterans

Resources and Hotlines For Families