Overview of Ritalin Use and Abuse

Ritalin is a brand name for the prescription drug methylphenidate. It is typically prescribed to treat symptoms of attention deficit hyperactivity disorder (ADHD) in children, adolescents and adults. An extended release form of the drug, which is also used to treat ADHD, may also be prescribed to treat narcolepsy.

Ritalin is a central nervous system stimulant, which means it speeds up brain activity as well as heart rate and blood pressure. Though not fully understood, Ritalin’s effect on ADHD symptoms and narcolepsy is believed to be through its influence on the neurotransmitters norepinephrine and dopamine. 1, 2

Ritalin may be taken recreationally for euphoria, alertness and improved sense of well-being. Like many stimulant drugs, misuse of Ritalin places users at risk for developing a drug dependency. The yearly Ritalin abuse rate is estimated to be about 4%, and those most likely to abuse Ritalin are white males who abuse other drugs and are affiliated with a fraternity. 6

How to Pay for Recovery and Treatment Options

The cost of a Ritalin recovery program will be based on what type of program it is (inpatient or outpatient), as well as:

If you find yourself unable to control your use of Ritalin, you may want to seek substance abuse treatment at an outpatient or inpatient rehabilitation center. Some people also find the support of 12-step programs helpful.

It may take some time to figure out which treatment option is right for you.

Think about which factors you want a recovery center to have and learn more about how substance abuse treatment works.

How Is It Used?


People typically abuse Ritalin to help them stay up and focus or to experience a euphoric high. People may also use it to lose weight or to enhance performance and attention. Ritalin is commonly abused by high school and college students to improve academic performance but also to get high. It is often taken orally. But it can be abused via alternate routes—including crushing the pills and inhaling the powder or dissolving it into solution to be injected into the bloodstream.

Ritalin can also be dissolved into a fluid and administered subcutaneously, intramuscularly or intravenously. When injected directly into a vein, the drug’s effects peak around 1 to 3 minutes after administration.

The short-term effects of Ritalin include: 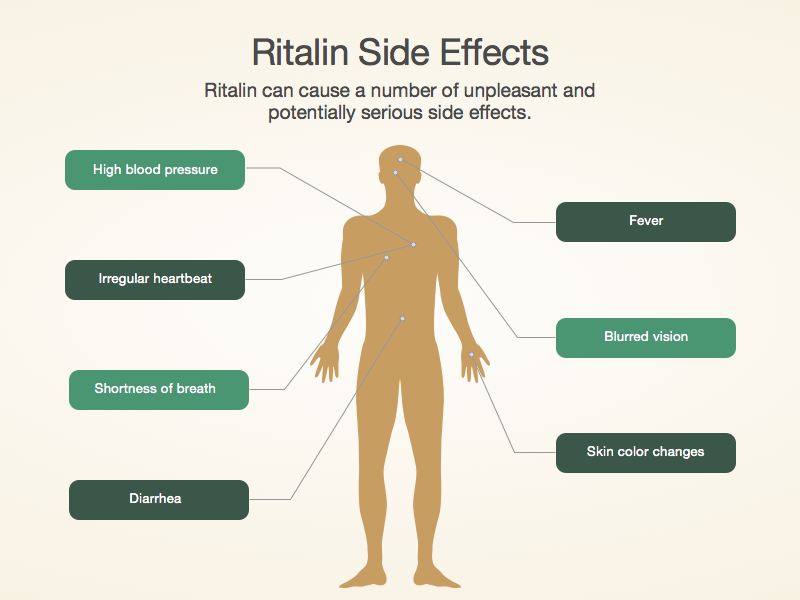 Abuse and misuse of Ritalin can lead to tolerance and addiction, as well as a number of other serious problems. These include:

According to the DSM-5, withdrawal symptoms can vary in onset. Depending on length of addiction and amount of dose, symptoms can begin from a few hours to a few days after use of Ritalin has stopped.

Major depression is one of the more critical withdrawal symptoms and may require medical attention due to suicidal ideation.

How Addictive Is Ritalin?

Ritalin is classified as a Schedule II drug. This means that it is tightly controlled due to the high potential for abuse and psychological and/or physical dependence.

Due to the effects Ritalin has on the reward system of the brain, misusing Ritalin can lead to an addiction as rapidly as 1 week after exposure. 3

Extended-release forms of the drug deliver the medication to the body over time, rather than all at once, making it more difficult to get high.

Overdose can occur with Ritalin, resulting from an overstimulation of the central nervous system. Overdoses of stimulant medication can lead to very serious heart problems or even death.

If you or someone you know may be suffering from an overdose of Ritalin, call 911 or visit the local emergency room immediately.

About 2.4 million teens a year are prescribed Ritalin. Studies show that stimulant misuse is a growing problem among teens, but there is some suggestion that this risk is slightly lower with Ritalin. Given that Ritalin has been approved for use with children and adolescents, close monitoring for potential abuse is critical among this vulnerable population.1 Many recovery options are available for Ritalin addiction. If you or someone you love is struggling with Ritalin, call to speak with one of our treatment support specialists.