Marisa has a bachelor’s degree in Health Sciences and a minor in Psychology from Drexel University and is currently pursuing her master’s degree in Social Work from Widener University.

Are You Addicted to Heroin?

Heroin is a highly addictive illicit narcotic. Those abusing heroin – first timers and chronic users alike – place themselves at high risk of an overdose. Heroin addicts are estimated to be between 6 and 20 times more likely to die than a non-using peer. 5 However, people can and do recover from heroin addiction.

How to Tell if You or a Loved One Is Addicted

Heroin addiction is associated with a few explicit signs and symptoms. If you or someone you love has exhibited at least 2 of the following behaviors in the past year, you may be addicted to heroin:2

It’s never too late to begin your road to recovery from heroin addiction. Whether your addiction is mild or severe, there is a treatment program that’s the right fit for you. Below are examples of the different types of recovery programs available: 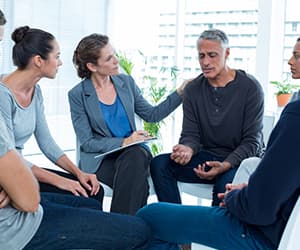 Most treatment for heroin addiction consists of medication combined with behavioral therapy. Some medications that are commonly used to treat heroin dependence include: 8

The short-term or side effects seen in someone with a heroin dependency may include: 4

Prolonged heroin use causes changes throughout the brain, including desensitization of the opioid receptors. When this occurs, users find themselves needing more and more heroin to achieve the same desired effects. This is phenomenon is called tolerance, and it is inextricably linked with a developing heroin dependency. 7 Chronic or long-term heroin abuse also has many harmful effects.

The long-term effects of heroin use include:

In general, many of these unpleasant symptoms abate within a week or two. However, some of these withdrawal symptoms may persist for months or even years, depending on the severity of your heroin addiction. 3

For many, these withdrawal effects are difficult to endure and may increase relapse risk. This is why it is important to seek the supervision and intensive treatment provided through a professional heroin recovery program.

Why Is Heroin So Addictive?

When you use heroin, it binds to opioid receptors in your brain, resulting in a cascade of molecular events including the activation of the mesolimbic reward system. This reward system typically releases dopamine when you participate in activities that support survival, such as sex and eating, resulting in a feeling of well-being and pleasure. Heroin causes dopamine to be released in large quantities, which in turn acts as positive reinforcement for you to continue using heroin. The brain records the details and circumstances of this pleasurable activity and stores it as conditioned associations, which may be the source of heroin cravings when you quit or are experiencing withdrawal. 7

Further, when you continue abusing heroin, your brain changes so that it begins to function sub-optimally without the constant presence of the opioid drug. Tolerance and dependence result from these neuronal adaptations, and withdrawal symptoms will occur if you stop using at this point.

The withdrawal symptoms are painful and uncomfortable and are “one of the most powerful factors driving opioid dependence and addictive behaviors,” according to researchers. 7

Can You Get Addicted to Heroin the First Time You Try It?

It is highly unlikely that you will get addicted to heroin the first time you try it. Addiction is characterized by problematic use that causes profound impairment in your life.

Everyone’s physiology is different, and some people may be more susceptible to addiction than others. If someone enjoys heroin the first time he or she uses it, this may lead to further use, which can in turn transition into dependence. Studies have shown that about 23% of people who use heroin will develop a heroin dependency. 1

If you or someone you care about is struggling with heroin addiction, help is available. Call today to get more information about heroin rehab programs in your area. Trained recovery support advisors are available to answer any questions you have about insurance and payment.