Federal drug laws, including the Controlled Substances Act, regulate the possession, trafficking, and manufacturing of drugs.

Even though states have their own laws on drugs, federal laws supersede state laws—including those regarding the medical/recreational use of marijuana. No federal laws regulate drug testing for private companies, but certain laws provide protections for workers.

Federal drug laws exist to control the use, manufacturing, possession, and distribution of various drugs that are legal and illegal.1

Federal agencies collaborate with both state and local law enforcement to ensure effective controls over substances that are deemed to be a danger to individuals and to society. Federal agents focus mainly on trafficking, but state agencies make most arrests for drug offenses, and many of these arrests are for possession.1

Each state has its own drug laws and regulations, but the Controlled Substances Act allows Feds to enforce federal drug laws in any jurisdiction regardless of the laws of any state.1

President Richard Nixon sought greater federal control over drugs in the early 1970s. During his presidency, the Comprehensive Drug Abuse Prevention and Control Act of 1970 was passed.1 One aspect of this law was the Controlled Substances Act (CSA), which allowed federal jurisdiction over specific plants, drugs, and chemical substances. It established a classification or scheduling system for drugs.1

The CSA considers a variety of factors when placing drugs in control categories, including the following: 4

Drugs are then categorized into 1 of 5 schedules:4

The Anti-Drug Abuse Act of 1986 allowed the CSA to include substances similar to controlled substances (such as synthetic drugs) as Schedule I drugs. It also established mandatory minimum sentencing laws for federal drug trafficking, depending on the substance and amount in question.

This act also addressed the differences between powdered and crack cocaine. For example, a person had to be caught with 100 times more powdered cocaine than crack cocaine to receive the more severe minimum sentence (the ratio was later reduced from 100:1 to 18:1 in 2010).1

The Anti-Drug Abuse Act of 1988 was enacted to reduce the availability and demand of drugs.1 This act created the Office of National Drug Control Policy (ONDCP) and the position of drug czar (director of National Drug Control Policy).1 It put in place criminal penalties for violations of the CSA on federal lands and also implemented mandatory minimum sentences for minors involved in drug offenses.1 Finally, the act also created the Chemical Diversion and Trafficking Act (CDTA) to reduce the availability of chemicals used to make illegal drugs.1

The charge of possession can be broken into 2 categories: simple possession and possession with the intent to distribute.

Drug trafficking and distribution laws set penalties for the transportation, sale, or smuggling of drugs. This term also applies to the illegal distribution of prescription drugs.7

Manufacturing refers to involvement of any step of producing an illicit drug, such as sales of chemicals used to make drugs or equipment used to produce drugs, or assisting in the production process.8

Manufacturing illegal drugs near schools or playgrounds can lead to double fines and sentences.8 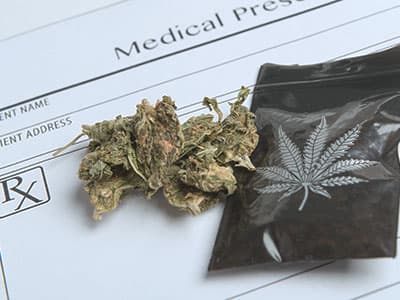 Federal laws consider marijuana to be a Schedule I drug, with penalties for the possession, distribution, growth, or sale of marijuana. However, various states have established laws and regulations for medicinal and even recreational use of marijuana.1

When it comes to marijuana, federal law enforcement agencies have traditionally targeted criminal networks instead of individuals.1 However, current Attorney General Jeff Sessions, a legalization opponent, has taken steps to remove protection for growers, sellers, and users of medical marijuana.9 He has been quoted as saying that “legalization results in greater use” and that “federal law remains in effect.”17

Medical marijuana is legalized in the following states:10

States that have legalized recreational marijuana include:10

The use of medical or recreational marijuana differs between states as well. California, for example, doesn’t list specific medical conditions that warrant medical marijuana, while other states, such as Iowa, Mississippi, Missouri, Oklahoma, and Tennessee, will only allow individuals with severe epilepsy or other debilitating conditions to be approved for medical marijuana.10

States such as California or Colorado are also open to recreational use, while more conservative states tend to look unfavorably on marijuana use in any form.10

Each state has individual laws regarding drug offenses, and these laws can be very different. States each have their own statutory authorities, scheduling bodies, and controlled substance acts, though federal agencies can take over jurisdiction at any time.1,11

Various federal agencies, including the DEA, Federal Bureau of Investigation (FBI), US Marshals Service (USMS), Department of Homeland Security (DHS), US Postal Inspection Service, and the Bureau of Alcohol, Tobacco, Firearms, and Explosives (ATF) cooperate with state and local agents to reduce drug use and distribution across the country.1

The consequences of drug possession can vary widely between states.

A number of federal requirements surround workplace drug testing. Private employers do not need a policy to ensure drug-free workplaces, with the exception of federal contractors and companies in safety or security-sensitive industries.15,16

No federal law directly oversees drug testing in the workplace.16 Different states have developed their own guidelines on drug testing. For example, some states require the employer to have reasonable suspicion or probable cause before drug testing, though this policy can violate the ADA.15,16 Other states allow random drug testing only under specific circumstances, while there may be restrictions only on public employers rather than on private companies.16

Some examples of state policies include:16