Fetal alcohol syndrome (FAS) is a condition caused by exposure to alcohol in the womb. People with FAS may have distinctive facial features, cognitive problems and impaired growth.

Getting treatment early can help prevent some of the problems people with FAS may develop later in life, such as legal issues, mental health disorders and being dependent on a caregiver.

What Is Fetal Alcohol Syndrome?

Fetal alcohol spectrum disorders (FASD) encompass all of the conditions caused by exposure to alcohol in the womb. 1 Fetal alcohol syndrome (FAS) is the most recognizable and serious of the FASDs. It is characterized by:

Prenatal exposure to alcohol can disrupt proper development and lead to fetal alcohol syndrome. Alcohol is detrimental to development at any stage of pregnancy. But it is particularly damaging in the first 3 months. 2 No matter what you might hear, it is not “safe” to drink alcohol in even mild or moderate amounts during pregnancy.

Fetal alcohol syndrome does not have a cure. But treatment can help address problems related to it.

The following symptoms can occur in babies suffering from fetal alcohol syndrome: 2

Common symptoms in people with a fetal alcohol spectrum disorder include: 1

If your child is diagnosed with fetal alcohol syndrome or a fetal alcohol spectrum disorder, he or she should receive treatment to address any physical or cognitive problems.

Fetal alcohol syndrome is considered the most recognizable of the fetal alcohol spectrum disorders due to the specific facial features associated with its diagnosis. 2, 8 Some research suggests that these facial features may be less apparent after the person begins puberty.3 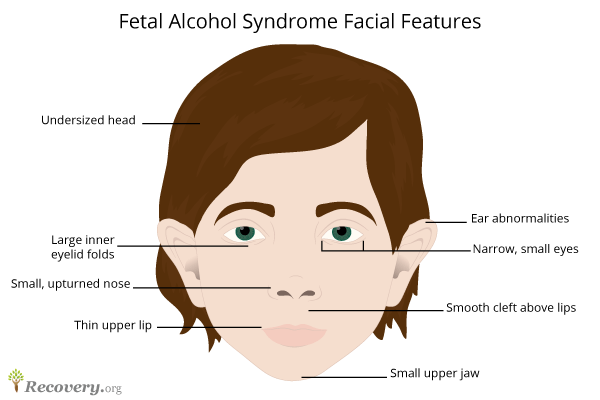 People with fetal alcohol syndrome are more likely to experience serious challenges than the general population, including: 4

Further, research has revealed that people with fetal alcohol syndrome can suffer from a number of adverse life outcomes, such as: 5

Some protective factors that may prevent antisocial behaviors in people with fetal alcohol syndrome include: 5, 10

As stated earlier, fetal alcohol syndrome does not have a cure. But some interventions can help improve the lives of people who have this condition.

The symptoms can be treated, especially if the condition is caught in early childhood. The earlier interventions are begun, the more effective they will be in helping the child develop different skills. 7 These early interventions typically treat children from birth to age 3. 10

If your child is diagnosed with fetal alcohol syndrome, get him or her assessed by a team of professionals who specialize in treating children with this disorder. They will be able to create a treatment plan designed specifically to meet your child’s needs.

The plan could include a home-based program as well as collaboration between language/speech therapists, psychologists, and social workers, depending on the child’s strengths and weaknesses.

Here are some things to keep in mind if you are the caregiver of a child diagnosed with FAS: 7

Each case of fetal alcohol syndrome is different, so interventions will depend on the person. They are adapted to fit the unique needs of the individual. The severity of FAS can vary as well as the types of symptoms (behavioral, cognitive, physical), which will affect the course of treatment. 10

Those affected by fetal alcohol syndrome may require different forms of treatment, which can include: 10

Again, the earlier your child receives treatment for fetal alcohol syndrome, the better. If you suspect that your child has a fetal alcohol spectrum disorder, make an appointment with his or her pediatrician right away.

How to Prevent Fetal Alcohol Syndrome


The best way to prevent fetal alcohol syndrome is to abstain from alcohol while pregnant. 2 If you are trying to get pregnant, avoid drinking alcohol while you are attempting to conceive. This precaution will help prevent accidental consumption in the early stages of pregnancy.

Nearly half of all pregnancies in the United States are accidental. 1 If your pregnancy was unintended, consult your doctor about potential complications. Use contraceptives if you drink heavily and are sexually active, but don’t intend to get pregnant. 2

Some mothers are more likely to give birth to a baby with a fetal alcohol spectrum disorder than others due to environmental and mental health factors.

Below are some risk factors for giving birth to a baby with a FASD: 1

If you drink and are an expecting mother or are trying to conceive, contact your physician about preventative treatments and counseling to prevent or lower the risk of having a baby with fetal alcohol syndrome.


Fetal alcohol syndrome is usually recognizable due to the unique set of facial features associated with the condition. But people with other fetal alcohol spectrum disorders may not display any remarkable physical characteristics.

Many adults living with FASDs have not been properly diagnosed and experience deficits in major areas of life as a result. Often, insurance disability classifications don’t include FASDs as a qualifying condition. In addition, many people are not aware of FASDs, which means that adults suffering from these disorders tend to have employment and housing problems.

Adults affected by FASDs are at risk for a number of serious problems, including: 9


Although there is some discrepancy on the prevalence of fetal alcohol spectrum disorders in the United States, FAS is considered the “leading cause of congenital mental retardation.” 3

Some research has suggested that as many as 50 in 1,000 babies have a FASD. 1 However, it’s difficult to uncover the true national rate of FASD due to the unwillingness of many mothers to admit their drinking habits while pregnant. 1

Of pregnant women between the ages of 15 and 44 years old: 1

Another study reported even higher numbers: 1

If you are pregnant and would like to get help for an alcohol problem, or if you are looking for substance abuse treatment for yourself or a loved one, call to speak to a recovery center advisor today.