Overview of Bath Salts Use and Abuse

What Are Bath Salts?

Bath salts are an emerging group of synthetic or designer drugs that are chemically similar to cathinone,1 a naturally occurring substance derived from the Catha edulis (khat) plant. It acts as a central nervous system stimulant, much like amphetamine.1, 2

Bath salts are typically distributed as a white or brown powder or in the form of a crystal or liquid. But they are sometimes available in tablet or capsule form.2

They are advertised as a “legal high” or “legal cocaine” and even sold online as actual bath salts (hence the name), jewelry cleaner, plant food or phone screen cleaner.3 Sellers label the product “not for human consumption” to sidestep drug laws.

How They Affect the Brain


Because bath salts are manufactured illegally, their chemical make-up is constantly changing. Still, the most common bath salts produce similar effects to many other stimulants by increasing the activity of 3 neurotransmitters, which are the chemical messengers of the central nervous system:

In July 2012, the DEA classified mephedrone and MDPV as Schedule I substances under the Controlled Substances Act. This means they have no accepted medical use and a high potential for abuse. They are illegal to possess, use or distribute. Enforcement of the laws is difficult, however, because street chemists continually tweak formulas to evade the DEA.

Not all programs cost the same. Factors that affect cost include:

In addition to selecting the type of bath salts recovery center, you will want to look at other factors in a program such as cost, location and the expertise of the staff.

Learn more about bath salts addiction treatment and how to choose a program.

Bath salts can be taken orally, smoked, snorted or injected.

Use of bath salts can be extremely dangerous and life-threatening. In the last decade, the number of emergency room and poison control center visits associated with their consumption has dramatically increased.

A number of dangerous effects are associated with bath salt use: 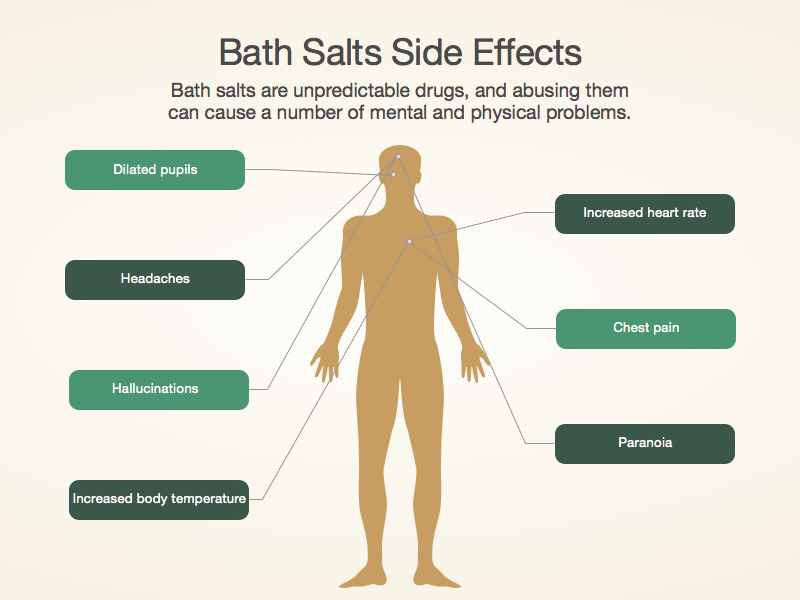 The long-term effects of bath salts remain largely unknown. Little research has been conducted into how bath salts interact with alcohol and other prescription or illicit drugs, or the outcome of mixing several synthetic cathinones, or bath salts.

If you or a loved one has displayed at least 2 of the following symptoms over the course of a year, you may have an addiction to bath salts:12

How Many People Abuse Them?

The extent of bath salt abuse is difficult to measure. Online user surveys provide most of the available abuse data.2

Abuse in the U.S.

In 2010, bath salts rapidly emerged as a new drug of abuse in the United States. A study published in 2014 from an online survey characterized users as mostly male, 18-24 years old, and Caucasian with some college education. In 2009 and 2010, a significant rise in the abuse of bath salts was reported in Western Europe.1,2 In late 2010, a survey reported that bath salts were the fourth-most commonly used drug in the United Kingdom (UK) behind cannabis, ecstasy and cocaine.15

An online survey of club-goers in the UK reported that 41% of those surveyed had used mephedrone.7

Findings from this same survey indicated that 10% of the sample reported using methylone.7

Bath salts have a high risk of overdose. One of the most profound results of an overdose is an incredibly long duration of some of the more severe mental effects—especially delirium and psychosis—which can last for days or weeks.14

If you suspect a bath salts overdose call 911 or visit the nearest emergency room.


Bath salts pose an increasing risk to public health, with reports of overdoses and deaths skyrocketing along with calls to poison control centers in the United States. 4

According to the American Association of Poison Control Centers, poison control centers received reports of 587 exposures to bath salts in 2014.

Call to speak with a treatment support specialist about finding a bath salts recovery center.