According to the Substance Abuse and Mental Health Services Administration (SAMHSA), approximately 7.9 million U.S. adults have a co-occurring disorder, meaning that they have both a mental health and substance use disorder.1 Of these people, only a small minority seek treatment for both conditions, and most receive no treatment at all.

Dissociative Disorders, and Trauma/Stressor-Related Disorders, make up a significant portion of co-occurring mental health disorders in substance abuse treatment. It is important that both mental health and drug abuse are addressed during treatment. Sometimes, mental health problems will lead to substance abuse; other times, the converse is true. In either case, the dynamic relationship between the two must be taken into account when attending a program. When assessing which treatment facility to attend, be sure to ask about what specific treatment approaches are offered for your mental health condition. If you are looking for inpatient treatment, call and ask what specific programs are available to treat “co-occurring” or “dually-diagnosed” conditions.

Adjustment disorder is a short-term condition. It occurs when someone is not able to adjust to or cope with a source of stress, like the death of a loved one, a trauma, or another significant life event. Symptoms include a marked distress in response to the event (out of proportion from what is considered contextually or culturally normal) accompanied by a significant impairment in social occupational, or other important areas of functioning.2 These symptoms appear within 3 months of the stressor onset and do not persist more than an additional 6 months. These individuals, in an attempt to cope with the stressor and their symptoms, often use drugs or alcohol.

Posttraumatic Stress Disorder (PTSD) will affect approximately 7% of U.S. adults during their lifetime.3 PTSD is a maladaptive response to a stressor, such as war, rape, or abuse, that leads to significant neurological, physiological, and psychological impairment. PTSD can develop both in individuals who experience the traumatic situation, themselves, and also sometimes those who witness the event.

Below are some of the symptoms associated with PTSD:2

Individuals with PTSD, because of the nightmare of symptoms they continue to experience, frequently attempt to self-medicate with drugs or alcohol. While drugs may temporarily ease symptoms, they generally make conditions worse in the long run.

With medical and psychological treatment, individuals can learn to cope with their symptoms without the use of drugs. Some clinicians like to refer to something called “Posttraumatic Growth,” whereby the individual makes contact with inner strength, wisdom, and abilities that were only discoverable because of their initial traumatic experience.

Depersonalization disorder can be characterized by the feeling that you are experiencing life from outside of yourself, watching yourself live it without feeling like you are actually participating.

In a survey of 394 adults given between September 2005 and January 2006 by the Department of Psychiatry, Mount Sinai School of Medicine, the two most common drugs that were associated with this disorder were hallucinogens and cannabis, followed closely by Ecstasy. While these drugs can bring about feelings of depersonalization while they are still active in the body, a diagnosis of depersonalization disorder is not made unless these symptoms continuously persist beyond intoxication.

Dissociative Identity Disorder (DID) and Addiction

Dissociative Identity Disorder (DID) is characterized by the presence of two or more distinct personality states, where the individual will have gaps in the recall of everyday events, personal information, or traumatic events that is beyond ordinary forgetting.2 While drug use sometimes co-occurs with DID, DID does not result from drug use, itself. However, it is important to address both of these conditions together during treatment if they are both present.

Treatment for Trauma Alongside Drug and Alcohol Abuse 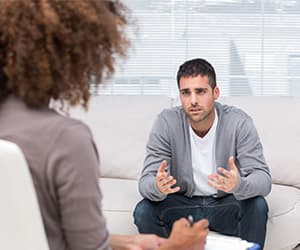 Individuals with co-occurring mental health and substance use disorders can choose to attend outpatient or inpatient treatment. Outpatient facilities allow one to still live at home and commute to the treatment center. Inpatient facilities, on the other hand, offer 24/7 monitoring and a wider access to services.

At an inpatient treatment facility, the center will start by using detoxification procedures to remove drugs and alcohol from the body. These substances may be causing the psychological issues or may be making them worse.

Once the substances are removed, the patient can move on to other therapeutic approaches. Doctors will work with patients to better control the symptoms of their conditions. In some cases, this can be done without medications, but many of the psychological conditions listed will need some medications to control. Most treatment facilities will incorporate psychological treatment, including individual and group therapies.

You may want to consider different types of addiction recovery programs, from animal-assisted therapy to those that focus on you interacting with other patients and living in shared quarters, so it’s important to find a facility that offers various options.