Cocaine addiction is a serious problem that can develop in association with repeated use of cocaine, a powerful reinforcing stimulant.8 Cocaine’s rewarding effects on the brain can lead people to continue using it, often in increasingly large amounts. Cocaine use and misuse is associated with several potentially harmful health effects; some of these dangers stem from the relatively common practice of mixing cocaine with other substances, like opioids.8

If cocaine addiction is having a negative impact on you or loved one, there is treatment available to help people stop their cocaine use and take back control of their lives. To help you better understand cocaine misuse, this article will discuss:

Cocaine is a powerfully addictive stimulant. Illicit cocaine is commonly found as a powdered white substance that is made from the leaves of the coca plant. It can also be processed into a freebase, rock-like substance, known as crack cocaine.2

People abuse cocaine to increase energy and experience feelings of euphoria. Though much of the drug is illicitly manufactured, cocaine remains classified as a Schedule II substance under the Controlled Substances Act. This means it has a currently accepted medical use, but also has a high potential for abuse.3

Cocaine is a central nervous system (CNS) stimulant, and its effects within the brain contribute to its addictive potential. Cocaine stimulates the reward system of a person’s brain, which reinforces continued use of the drug. The brain’s reward system also contains circuits that help to regulate motivation and emotions. When a person uses cocaine, they can overstimulate this system and alter a certain type of brain cell signaling to give rise to feelings of euphoria.5

How Does Cocaine Work?

Cocaine primarily produces its reinforcing pleasurable effects by stimulating the area of the brain known as the mesolimbic dopamine system, or the reward pathway. This pathway is responsible for releasing the neurotransmitter known as dopamine, which is your body’s main reward chemical that helps motivate you to repeat rewarding experiences.6

The brain releases some amount of dopamine in response to normally reinforcing experiences, such as eating and sex, but cocaine use can result in over-activation of the reward circuit by temporarily flooding the brain with active dopamine. This can lead to feelings of euphoria and a desire to continue using the drug.6

Dopamine isn’t the only neurotransmitter involved with cocaine’s physiological effects. Cocaine also increases norepinephrine, which is one of the most abundant signaling molecules in the brain. It plays a role in functions like arousal, attention, mood, learning, memory, and the stress response.

Norepinephrine may also play a role in the reward process not only through its interaction with dopaminergic neurotransmission, but by helping to facilitate what some feel are the rewarding effects of cocaine. These rewarding effects may also influence relapse or reinstatement of drug-seeking behaviors.7

Over time, some of the neurochemical adjustments associated with repeated and long-term use of cocaine may result in dependence. As cocaine dependence develops, a person may begin to feel like they need cocaine to function normally. At the same time, as the brain becomes less sensitive to the artificially heightened effects of dopamine due to chronic cocaine use, a person can develop tolerance. This means that a person can feel like they need to use cocaine repeatedly, or in higher amounts to experience the previous high.8, 17

Much of the euphoric rush that occurs shortly after using cocaine can be due to the increased dopamine activity. With its full range of effects though, cocaine use can have additional short-term effects, both desirable and unpleasant, such as:8

Cocaine’s high is relatively short acting. Depending on the method of use, cocaine’s euphoric effects may be felt immediately but disappear within a matter of minutes to an hour. This can lead to a come-down or crash characterized by unpleasant or negative feelings and cravings that can motivate continued or binge use of cocaine. Some people may drink alcohol or use other sedating substances as a way to help minimize the negative effects of a cocaine crash.9

Why is Cocaine Addictive?

Cocaine is addictive because it impacts the brain’s reward pathway. Cocaine’s effects on the brain reinforce a person’s desire to keep using in order to obtain cocaine’s pleasurable effects.

Specifically, cocaine interferes with the synaptic transmission that occurs between two brain cells. Normally, dopamine is released by one neuron (brain cell) into the synapse (the space between brain cells) and attaches to and activates receptors on a neighboring cell. Then, another bit of cellular machinery known as a transporter removes dopamine from the synapse to maintain a healthy balance. Cocaine interferes with this process, which leaves too much active dopamine within the synapse, leading to the reinforcing euphoria.5

When a person uses the drug, they feel high, and when they stop using it, they crash. As a person crashes, they may feel an urge to repeat the experience, which can fuel the cycle of addiction.

Over time, significant cocaine dependence may also develop. Dependence can cause several psychological and physical withdrawal symptoms to arise when cocaine use stops. People may keep using cocaine as a way of preventing these often-unpleasant symptoms. Coupled with tolerance, which means they need more of the drug to achieve the previous desired effects, compulsive cocaine use and addiction becomes even more likely.8, 17

How is Cocaine Used?

People most commonly use cocaine by snorting the powder or dissolving it in liquid and injecting it. Cocaine may also be processed into crack, a highly addictive freebase form of the drug that can be heated, with the resulting vapor inhaled. The faster cocaine reaches our bloodstream to be carried to the brain, the faster the high. If cocaine is snorted, the high may not come on as quickly, but the effects can last 15-30 minutes. If cocaine is smoked or injected the high is almost immediate, but it also wears off quickly and may only last 5-10 minutes.8

What Are the Health Effects of Cocaine?

Cocaine has several adverse short- and long-term effects, some of which can even be deadly.8 Cocaine toxicity can result in overdose, land people in the emergency room, and have other potentially devastating consequences. Awareness of these effects may help highlight an individual’s need for cocaine treatment.

The short-term effects of cocaine can include:4

These effects may be most apparent while a person is under the influence of cocaine, but some may remain even after the effects of cocaine start to wear off. 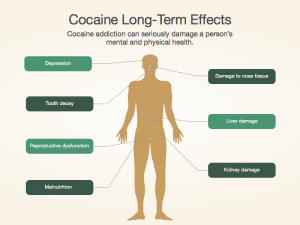 Long-term and/or chronic cocaine use can lead to mild to severe health effects, such as:4, 8

Signs and Symptoms of Cocaine Addiction

If you or a loved one are using cocaine, you may start wondering what the signs of cocaine addiction are. Some common behaviors and certain symptoms of cocaine addiction may include things like frequent nosebleeds, twitching, or mood swings, but ultimately, diagnosis by a professional is determined based on the criteria outlined by the American Psychiatric Association (APA) for stimulant use disorder.12 If a person exhibits or experiences at least two of the following diagnostic criteria over the course of a 12-month period, it may be time to seek help for their cocaine misuse:13

People with significant levels of cocaine dependence may experience withdrawal symptoms that can range from mild to very unpleasant. Some of these symptoms are felt right away, while others—such as cravings and mood changes—can last for months after quitting cocaine use. Some withdrawal symptoms may begin even if you still have cocaine in your system.9

Cocaine withdrawal symptoms can be difficult to withstand, which is why some people relapse. Cocaine cravings are commonly felt during the withdrawal period and can additionally prompt person to re-initiate use.9

Unlike the withdrawal syndromes of some other common drugs of abuse (e.g., alcohol, opioids), cocaine withdrawal is not typically associated with pronounced physical symptoms. Withdrawal symptoms may include:9, 14

Dangers of Mixing Cocaine with Alcohol

People commonly drink alcohol while using cocaine. In some instances, people may use alcohol to blunt some of the unpleasant side effects of cocaine. They may also use it as a way of dealing with either cocaine withdrawal or merely the crash that follows a binge.9,15

Even if you don’t use cocaine and alcohol at the same time, you can still experience dangerous effects. According to the Drug Policy Alliance, the combined cardiovascular risks of cocaine and alcohol can occur even when used separately on different days.14

While there are no currently approved medications to treat stimulant use disorder, cocaine addiction treatment typically involves behavioral therapies to help address the issues that led to the addiction, help you develop better coping skills, and avoid relapse.14

For many people, a formal detox period can be an important first step in the recovery process. Though there are no medications approved for managing stimulant withdrawal, and no specific clinical interventions may be needed, the Substance Abuse and Mental Health Services Administration explains that treatment in the form of supervision, evaluation of recovery progress, and other means of supportive care can help people establish abstinence as their withdrawal symptoms gradually ease.16

While in some cases more intensive levels of medical care may be needed to address medical complications associated with active cocaine use or significantly severe withdrawal issues such as depression, non-medical withdrawal management may be best achieved through intensive outpatient care.16

Once a person successfully detoxes, they can transition to a professional treatment facility so they can move forward with rehabilitation and recovery work. Addiction is a complex, relapsing disease, so treatment needs to be tailored to the individual and address the whole person. For some people, this may require treatment for any co-occurring mental health disorders, such as depression or anxiety.

You may be able to pay for cocaine addiction treatment with health insurance.

If you or someone you care about is struggling with cocaine addiction, American Addiction Centers is here to help. Our evidence-based treatment services can help you start the road to recovery with cocaine detox treatment programs and other services. Our admissions navigators are available 24/7 to listen and help you find treatment. Contact us at to speak to a navigator or verify your benefits online in just a few minutes.