Lauren is a Web Content Writer at Recovery Brands. Before joining the company, she served as the Program Director for a community-based HIV/AIDS and cancer non-profit in San Francisco.

Lauren holds a B.A. in Creative Writing from Johns Hopkins University and a Master’s in Public Health from the University of California, Berkeley.

A Guide to Addiction and Recovery for LGBT Populations

Lesbian, gay, bisexual, and transgender (LGBT) individuals are more likely to use drugs and alcohol due to homophobia, rejection from families, and a history of trauma. They face a number of barriers that make it difficult for them to enter rehab, and they often have certain unique needs that must be addressed for them to recover. Research shows that LGBT individuals have better outcomes in treatment and addiction recovery when they are part of an LGBT-specific program or a program that is LGBT-friendly.

Why Does the LGBT Population Use Drugs and Alcohol? 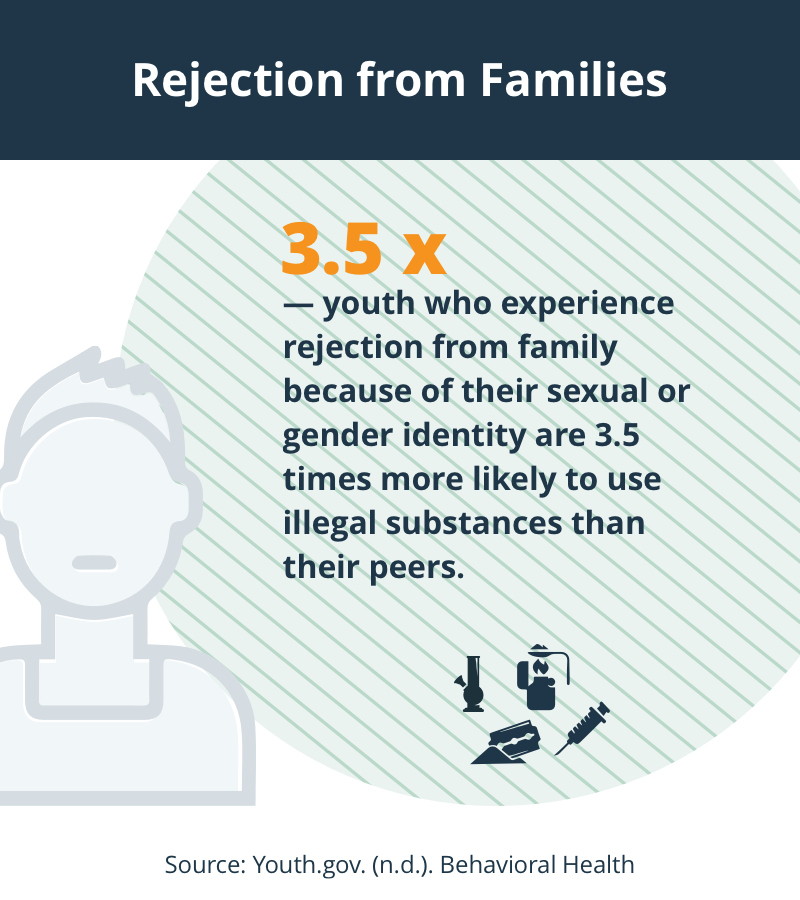 Other factors that contribute to an LGBT person’s likelihood of using substances may include shame and guilt about sexuality, as well as mental health disorders including anxiety, depression, and posttraumatic stress disorder (PTSD).

Which Drugs Are Commonly Abused in This Community?

According to the Centers for Disease Control and Prevention, when compared to the general population, lesbian, gay, bisexual, and transgender individuals are more likely to use drugs and alcohol and have higher rates of substance abuse. 8

Drug misuse is associated with risky sexual behavior and unprotected sex. Some people abuse alkyl nitrites (“poppers”) and Viagra, which can have significant side effects. 9

Other commonly abused substances include: 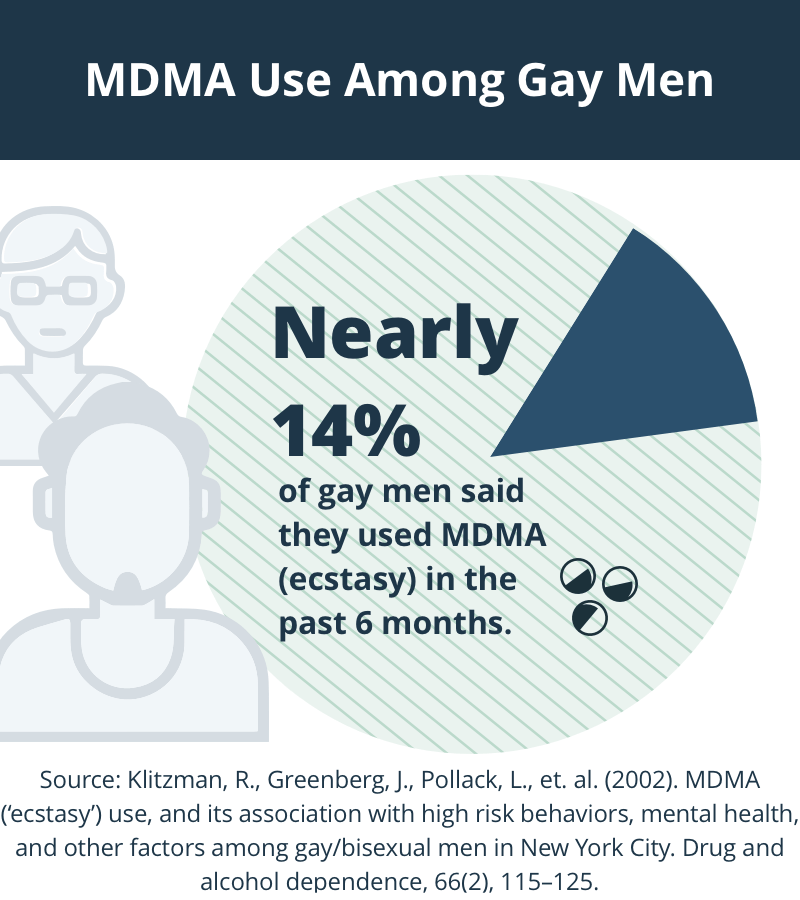 What Are the Signs That Someone Is Addicted?

Addiction is characterized by compulsive behavior and uncontrollable drug use despite negative health and social consequences.20 Symptoms of addiction will vary depending on the individual, their drug/s of choice, and their mental health status. But below are some general signs and symptoms:21

Addiction is a chronic condition. If it is left untreated, it can result in a number of negative social and health consequences including damaged relationships, financial problems, accidents, overdose, and death.

Why Do LGBT People Have a Hard Time Getting Treatment?

Homophobia, discrimination, and insensitivity can make it extremely difficult for LGBT people to feel comfortable getting treatment. If a lesbian, gay, bisexual, or transgender individual is denied medical or social services, they will often turn to social workers, rape crisis counselors, and emergency shelter providers for support. 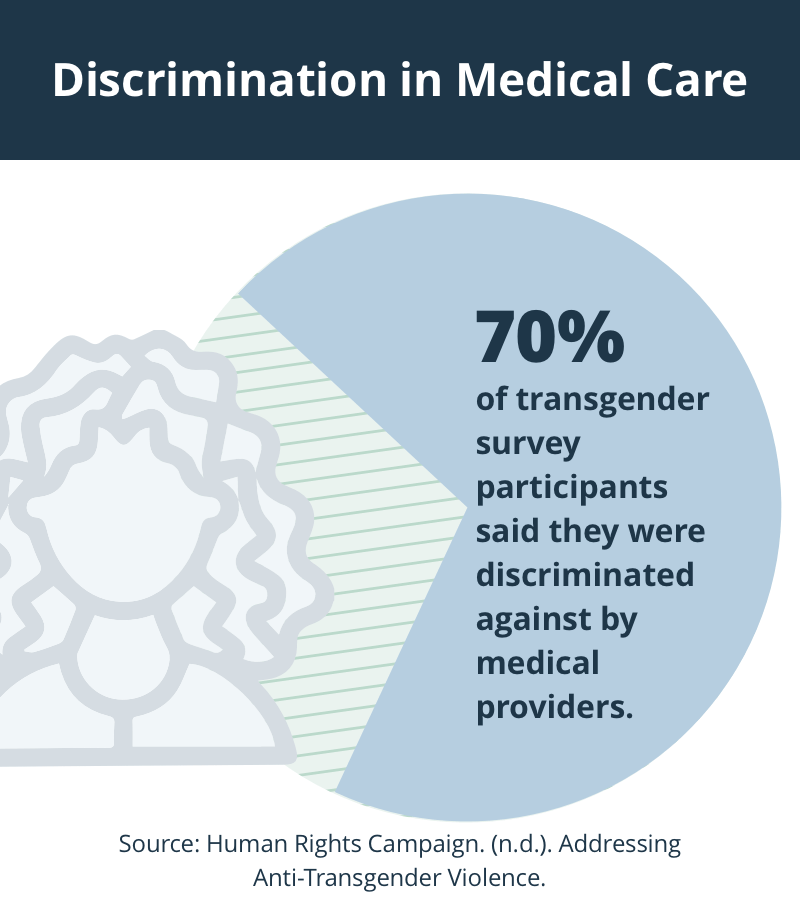 In addition, very few substance abuse treatment programs are equipped with trained staff and culturally competent programming to meet the needs of this population.

Other barriers to treatment may include but are not limited to:23,24,25,26

What Are the Special Needs of These People in Treatment?

Providers should have a solid understanding of the stressors and traumatic events that lesbian, gay, bisexual, and transgender individuals face, including: 29,30

Given the high rate of substance use and substance use disorders, psychiatric disorders, and suicide among LGBT people, it is important that they feel safe to share experiences related to sexuality while in treatment. Treatment centers that provide appropriate services for co-occurring issues such as HIV and STDs, anxiety, depression, and PTSD, are frequently in a better position to meet the treatment needs of LGBT youth, adults, and elders.

What Are the Common Types of Recovery Programs?

Treatment for a substance use disorder can be given in a number of ways. Depending on your location, drug abused, and severity of addiction, you may be referred to any of the following types of recovery programs:

Given the high rates of mental health issues in the LGBT community, therapy can play a vital role in treating addiction. LGBT individuals who are in therapy often report feeling anxious, fearful, isolated, depressed, and have trouble trusting other people. All of these feelings can fuel substance abuse, so it’s especially important to address mental health concerns during treatment.

Numerous studies have found that both individual counseling and 12-step program participation are beneficial components of substance abuse treatment. Depending on your situation, you may engage in any or all of the following during rehab:

How Do You Find an LGBT Rehab Center?

According to the National Survey of Substance Abuse Treatment Services (N-SSATS), only 6% of rehab centers offer specialized programs for the LGBT population. The survey found that private, for-profit treatment centers, as well as facilities that treat both substance abuse and mental health, were more likely to offer LGBT programming.32

Although the percentage of centers offering treatment tailored to the LGBT community is small, many centers offer LGBT tracks as part of a larger program. Also keep in mind that even if a recovery program does not offer exclusive LGBT treatment, it may still offer an accepting and supportive environment.

If you are looking for a center that specializes in LGBT treatment, you can begin by searching online and reading reviews. Other ways to find an LGBT program include:

What Happens After Rehab?

Rehab is the beginning of recovery, not the end. As you transition out of treatment, set up an aftercare plan of ongoing support and recovery services to keep you on track. Work with treatment staff to create a plan that includes any combination of the following: