A Guide to Addiction and Recovery for Men

Men are more likely than women to develop addiction, with some estimates showing men’s rates nearly twice that of women.1 Commonly abused substances among men include alcohol, marijuana, and heroin. Reasons for use may include trauma, abuse, mental health disorders, or chronic pain. Left untreated, addiction can lead to damaged relationships, loss of employment, health problems, and even death.

Some rehab programs place additional focus on issues commonly seen in men, such as anger management and war-related PTSD.

Which Drugs Do Men Typically Abuse?

Drugs that men typically abuse include: 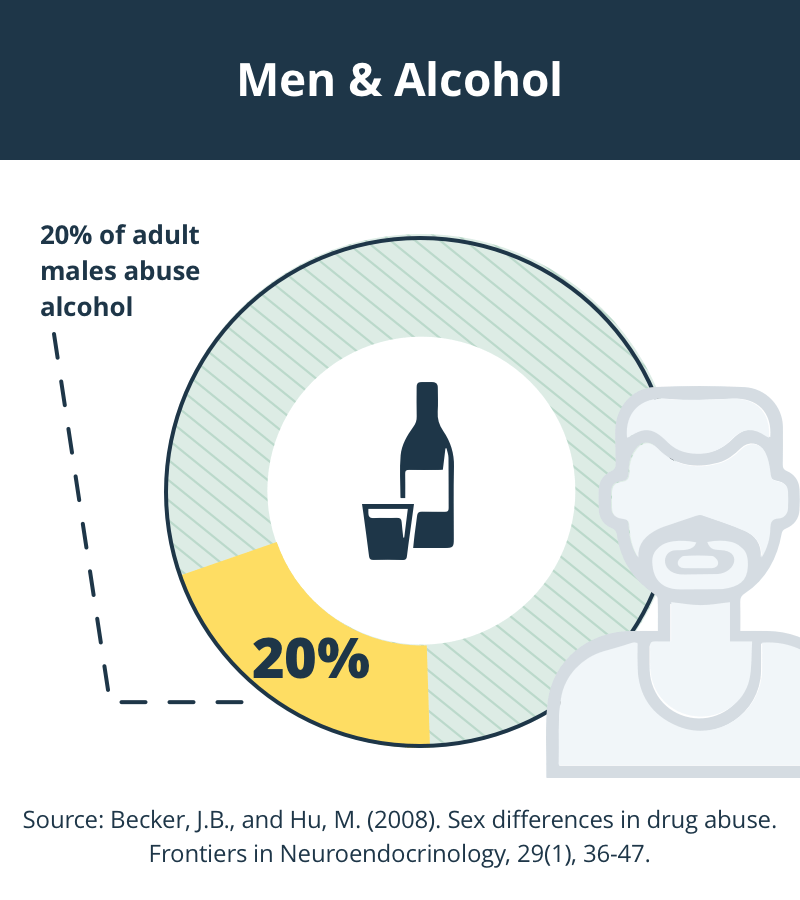 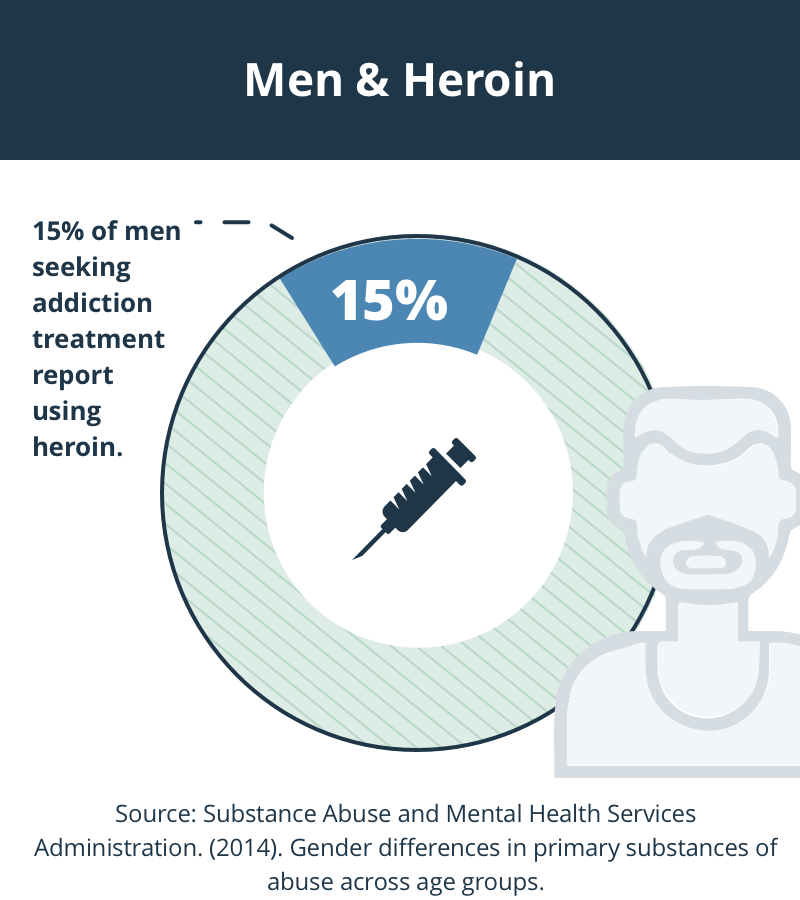 Why Do They Abuse Drugs?

Men abuse drugs for a variety of reasons, and a number of risk factors can predispose them to developing a substance use disorder. These can include: 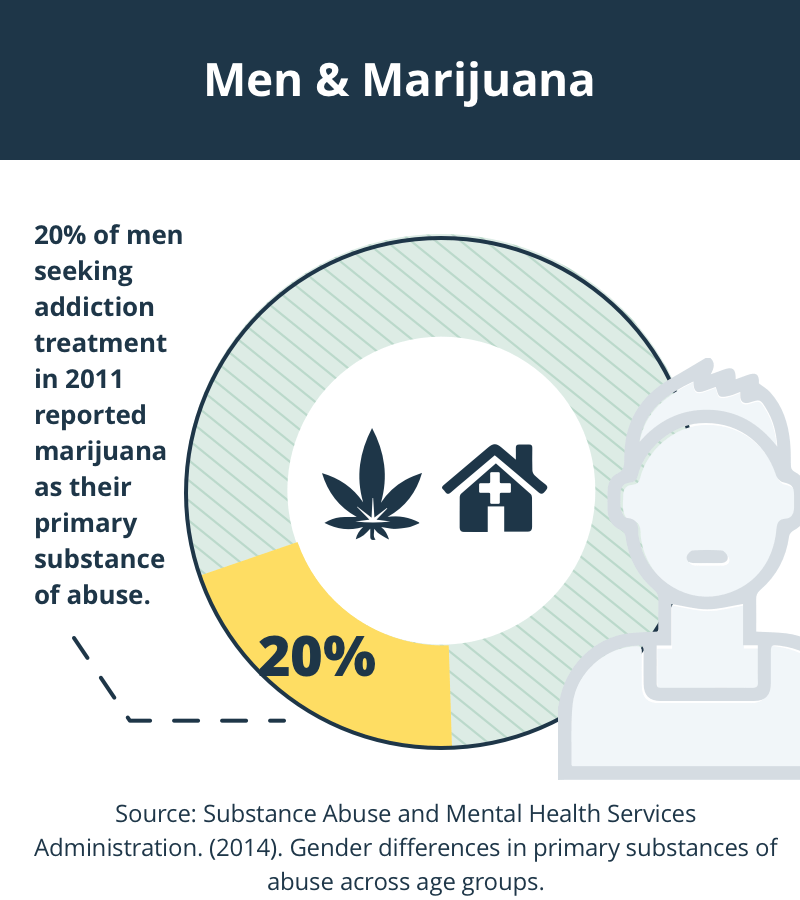 What Are Some Signs of Drug or Alcohol Abuse?

Some general symptoms of addiction have been identified, and they can vary depending on the substance(s) being used. Warning signs of addiction in men include:16 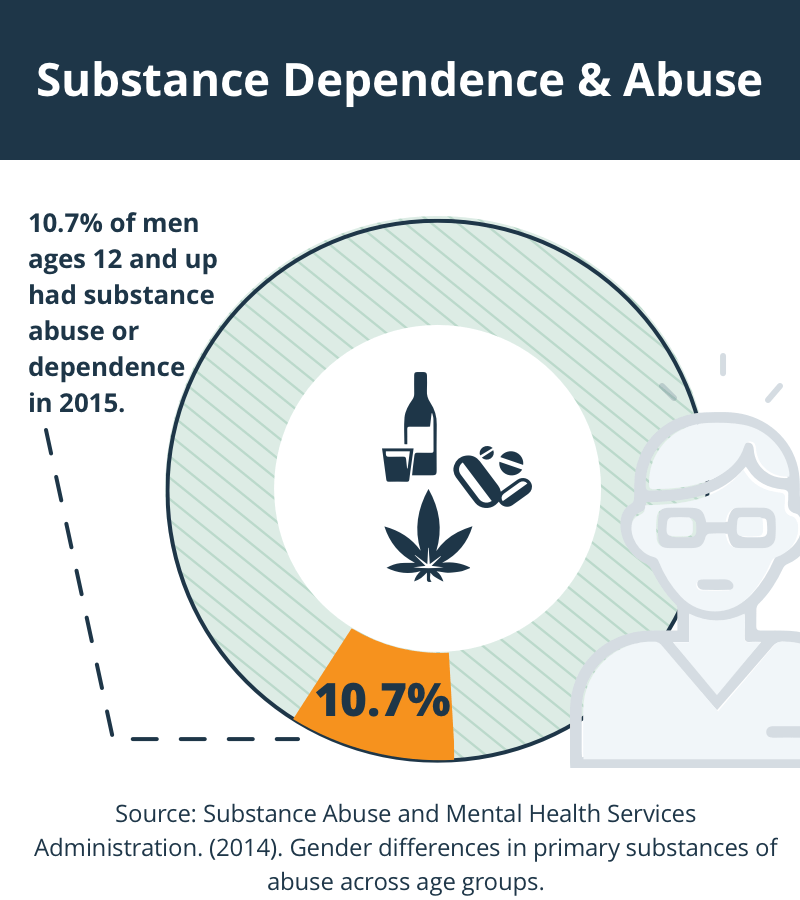 Specific substances have physical symptoms that can be observed when the person is under the influence or abusing the drug. These can include:

What Are Some Other Conditions That Addicted Men Suffer From?

Men are more likely to report co-occurring mental health and substance use disorders than women.3 The symptoms of both conditions can be worse, last longer, and be more difficult to treat than either condition alone. Common mental health disorders seen in men abusing drugs or alcohol include the following: 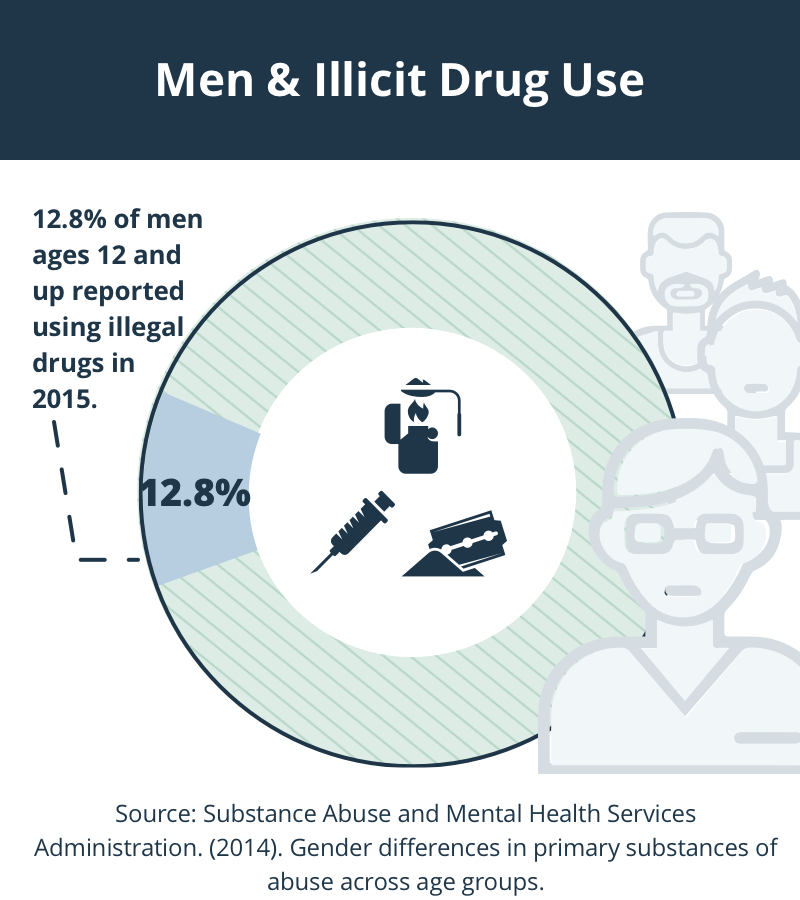 How Is Substance Abuse Treated in This Group?

Substance use disorders are treated using a variety of therapeutic techniques. 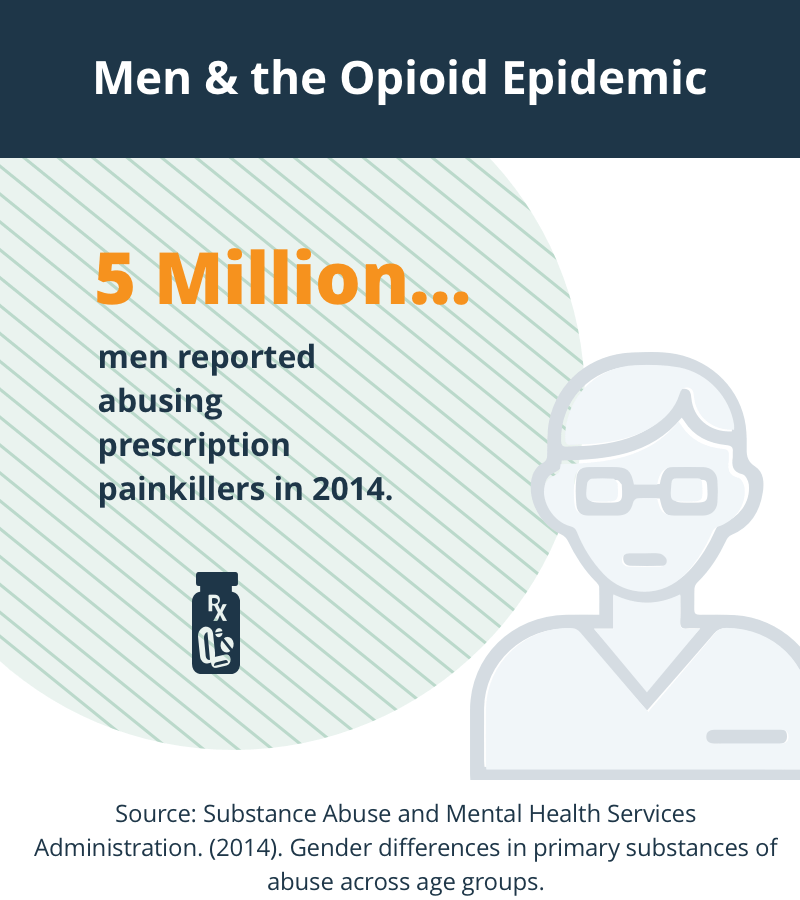 In general, the treatment process begins with detox, then transitions to formal counseling, learning skills focused on relapse prevention, and medication as needed.

Although rehab for men and women is often similar, some men may have specific treatment needs. These can include:

Some facilities or practitioners may incorporate holistic techniques to supplement counseling. These can include spiritual practices, such as meditation, or physical activities, such as working out, yoga, or outdoor activities.

What Types of Programs Are Available?

Recovery programs for men can include:

Many men seek treatment for addiction. In 2011, nearly 67% of the 1.8 million people who sought treatment were male.1 Still, many men might be reluctant to reach out for help. Knowledge of programs geared specifically toward them could increase the number of men who seek treatment.

How Much Is Rehab, and How Do You Pay?

The cost of rehab can vary depending on various factors, such as the location, type of facility, length of stay, and whether or not the person has insurance.

Detox facilities can cost $600-$1,00 per day, and the length of stay depends on how long it takes for the substance to clear a person’s body. For a 30-day inpatient stay, the cost can range from $400 to $900 per day, depending on the type of facility. Outpatient treatment can cost between $100 to $500 per treatment session.22

Most insurance plans include some sort of substance use treatment coverage, which can cover most or all of the cost of treatment. Those without insurance may be able to obtain state-funded insurance to help pay for treatment.

Most facilities will work with patients to develop a payment plan if necessary, or offer financial assistance. For some people, borrowing from friends and family or using crowdfunding sites such as GoFundMe can help pay for treatment. Loans, standard credit cards, health care credit cards, or flexible spending accounts (FSAs) can also help people afford rehab.

What Happens After Rehab?

Men leaving treatment will have to re-learn skills, such as how to live without using alcohol or drugs. They may need to find housing that is stable and supportive of recovery, change groups of friends, find or change jobs, and learn to adjust to a change in family dynamics.

Many rehab centers help men develop an aftercare plan from the beginning of treatment. Aftercare is individualized to help patients remain sober, and it can include outpatient treatment, private therapy, 12-step meetings, and/or sober living options. Sober living and long-term residential treatment provide structure and monitoring, and teach men how to be accountable for their actions as they slowly learn how to readjust to society while sober.

The resources below can help men find the right treatment, get support, and maintain sobriety.