A Guide to Addiction and Recovery for Teens

Teens may use drugs due to peer pressure, curiosity, or to do better in school. Drug abuse can lead to unprotected sex, mental health problems, overdose, and damaged relationships. Many rehab programs are designed specifically for teens, including recovery high schools and wilderness therapy programs. Some families turn to interventions to help get their adolescents into treatment. 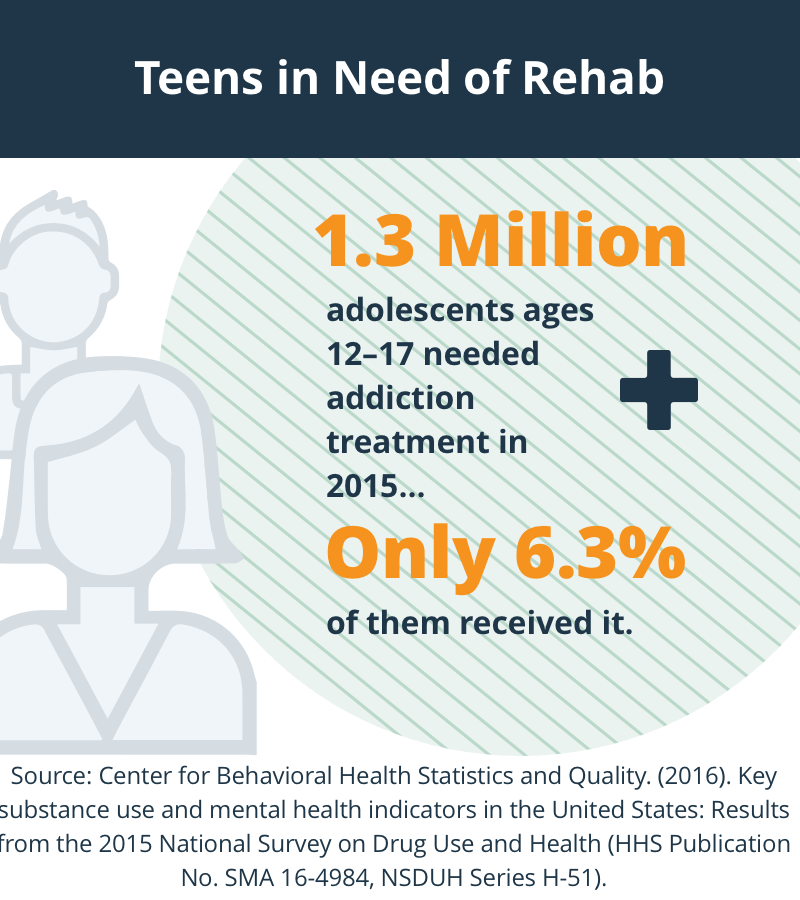 What begins as experimentation can turn into addiction for many teens. In 2015, about 1.3 million adolescents aged 12 to 17 needed treatment for a substance abuse problem. But only about 80,000, or 6.3%, received it.1

When you fear that your child or your friend is abusing drugs or alcohol, panic may take over. The first step is to try to find out if the person is actually abusing drugs and then seek help. As a parent, loved one, or friend, learning about teen drug use, addiction, and treatment can help you discover whether a teen has a problem and what recovery programs are available based on the extent of the problem, any mental health issues, and other factors.

Why Do Teens Abuse Drugs? 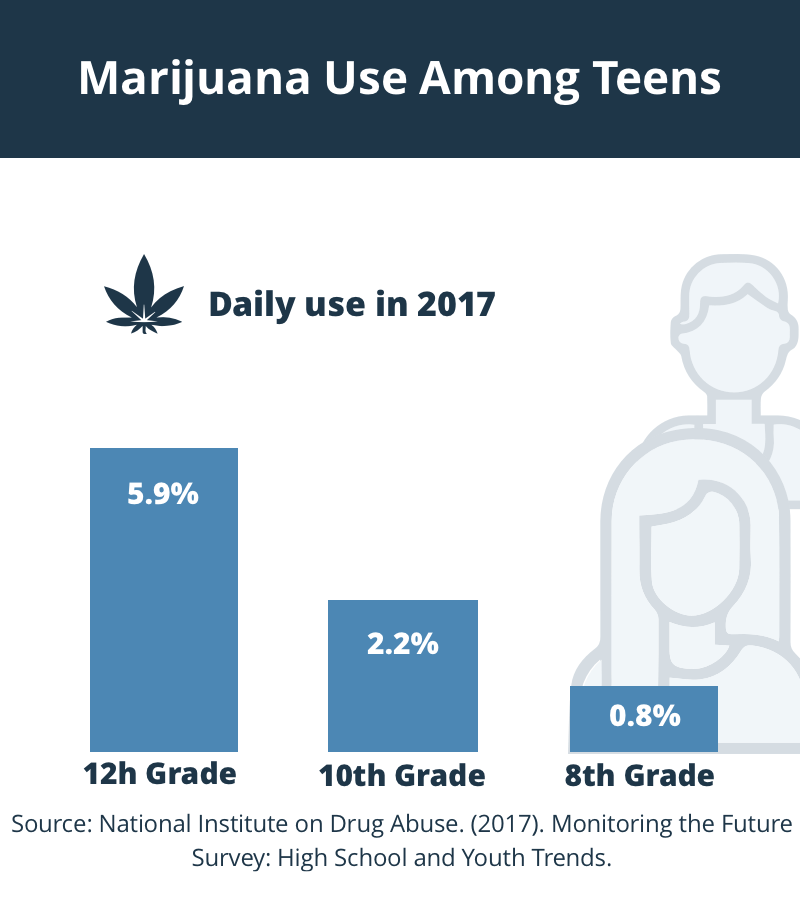 It is normal for teens to try things and test boundaries. Teens are wired to try new experiences and to take risks while finding their own identity. According to Nora Volkow, a physician and the director of the National Institute on Drug Abuse, “The adolescent years are a key window for both substance use and the development of substance use disorders.”2

In the midst of self-discovery and exploration come choices, both good and bad. These decisions can include trying drugs, cigarettes, or alcohol. Common reasons teens abuse drugs include:

Substance abuse development is influenced by a variety of individual, familial, genetic, and social risk factors.3 Factors that have been identified as contributing to the risk of teens experimenting with and using drugs include:

Which Drugs Are Commonly Abused by Teens?

According to the National Institute on Drug Abuse, the use of illicit drugs among teens declined from 2015 to 2016. However, use of marijuana remained stable.4 The choice of drug depends upon what is most available to the teen and what is used by friends or peers.
The most common substances used by teens include: 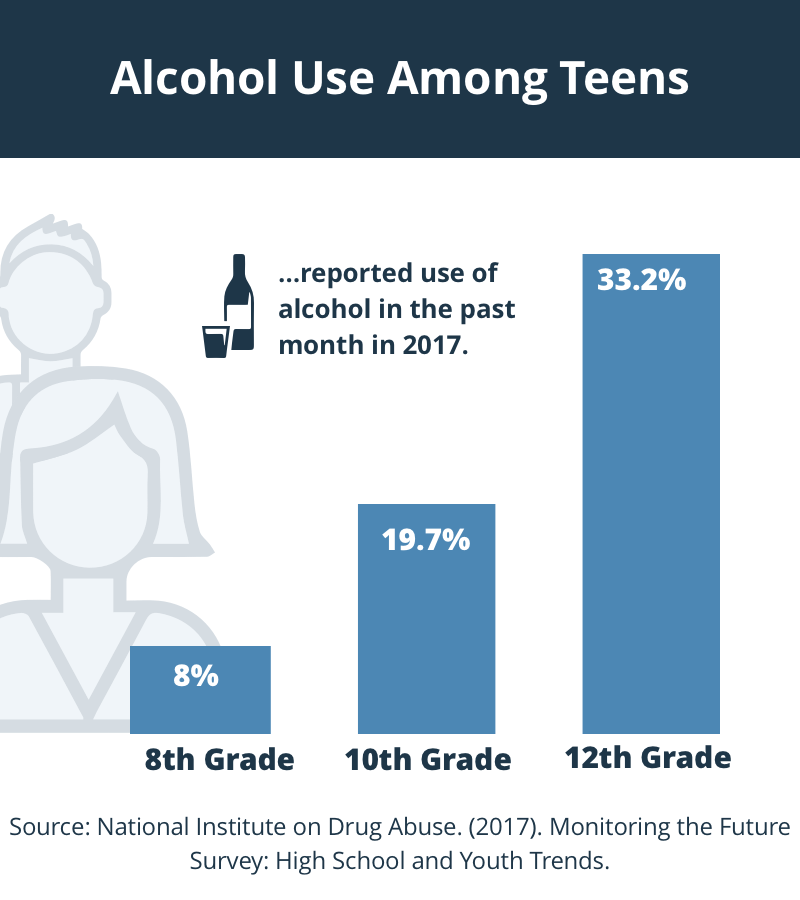 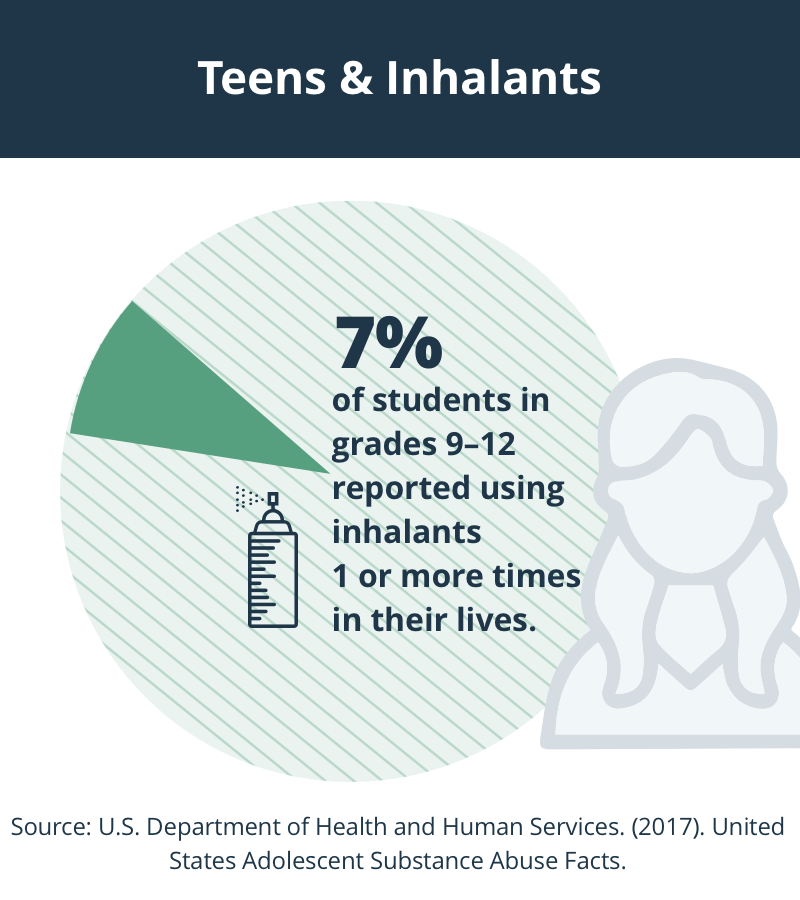 What Are the Risks of Drug Use?

The National Institute on Drug Abuse (NIDA) states that the physical effects of drug abuse in teens are not the only negative effects. Once a teen begins taking drugs for recreational use, the likelihood of them making other poor decisions and being involved in other high-risk activities increases significantly.

Abuse of drugs may ultimately lead to long-term impairment in brain development and addiction.2

How Do You Identify Addiction?

Teens tend to be moody, sleep a lot, and change friends frequently even when life is good. This may make it difficult for parents or friends to know when to be concerned about drug abuse. The following is a list of signs that may potentially indicate drug use:2

These signs are not specific to drug abuse. They may also indicate a mental health disorder and should be monitored and discussed with your child’s family doctor for appropriate medical treatment.

How Do You Get Someone Into Treatment?

Parents often feel that even healthy teen children do not want to talk or receive advice from them. Research shows that this is actually not true. Your child does want to talk to you and values your opinions on decisions they make.

Starting these conversations can be difficult and intimidating. The best principle to use when speaking to your teens is honesty. Some tips from the American Academy of Pediatrics include the following:7

You might want to consider an intervention, which is a planned meeting where you speak to the person about suspected drug or alcohol abuse and get them to agree to treatment.

If you have any fears of how your teen will react, do not do this alone. Instead, consider using a skilled interventionist. An interventionist, psychiatrist, psychologist, or social worker can help you talk to your teen and create a plan for after the intervention.

It’s true that teens under 18 can be sent to rehab by a parent or legal guardian against their will. However, treatment may progress more smoothly and have more of an impact if the child can accept the need for treatment. Once they are a legal adult, they have the right to decline treatment.

What Kinds of Treatment Programs Are Available?

The National Institute on Drug Abuse lists 6 issues to consider when choosing the type of treatment for your teen:2

Here is a brief list of different types of treatment programs:

While in a treatment program, your teen will engage in different types of therapies, such as:

When choosing a program, think about the special needs of the teen. Programs should allow teens to complete their school work while in rehab. Treatment for mental health disorders such as ADHD, depression, or eating disorders needs to be considered. Teens may also need assistance with other issues, such as low self-esteem, body image, trauma, abuse, and peer pressure.

What Happens After Treatment?

Addiction can be a lifelong battle, which means that your teen may need to take part in community-based programs or group therapy even after treatment. Many teens choose to participate in Teen Addiction Anonymous, NA, or AA programs to receive ongoing support, be reminded of why they quit using, and help others.
This type of aftercare treatment can help prevent relapse. Other forms of aftercare include sober living homes, individual therapy, and group therapy.

How Can You Prevent Drug Abuse in Adolescents?

The main reason kids do not use drugs is their parents’ positive influence and the fear of disappointing people they look up to. The National Crime Prevention Council recommends speaking early and often to your child about drug use.10 Below is a list of ways the council suggests to keep the conversation going and prevent your child from trying drugs or alcohol:

Protective factors, such as being active in faith-based organizations or athletic organizations and spending time around people who don’t use drugs, can also prevent drug abuse in teens.