Fentanyl Deaths Skyrocketed More than 1000% Over Six Years in the U.S.

Deaths from fentanyl skyrocketed more than 1000% from 2011 to 2016, according to new data released March 21 from the US Centers for Disease Control and Prevention.  Its report not only took into account the rise in drug overdose deaths involving the synthetic opioid, but it also illustrated which age groups, genders, races, ethnicities and regions were most impacted.

In order to determine the number of fatalities associated with fentanyl, researchers analyzed death certificate information that included mentions of fentanyl and fentanyl analogs (other synthetic narcotics).  In doing so, they found that 2011 and 2012 remained about the same, each hovering around 1,600 deaths.  In 2013, the number began to increase a bit, with just over 1,900 fatalities.  After that, fentanyl-related deaths began to double each year, with fentanyl involved in 4,223 deaths in 2014, 8,251 deaths in 2015, and a whopping 18,335 deaths in 2016. 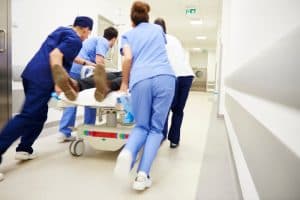 Regarding gender, the researchers found that while men and women had similar rates of fentanyl-related deaths from 2011 through 2013, the rate for males began increasing more rapidly than the rate for females. By 2016, the rate of men dying from fentanyl overdoses was nearly three times (2.8) that of women.

And while there were increases in fentanyl-related fatalities in all age groups from 2011 through 2016, the largest rate increases were among younger adults in both the 15-24-year-old and 25-34-year-old segments, with fentanyl overdoses increasing about 94% and 100% each year, respectively.  Adults aged 65 years and older, on the other hand, saw the smallest average annual percent change (41.6% per year).

Researchers also found that while whites had the highest overall rates of fentanyl fatalities, death rates among African Americans and Hispanics increased at a higher rate.  Between 2011 and 2016, African Americans had fentanyl death rates increase 140.6% annually and Hispanics had an increase of 118.3% annually.  Whites, on the other hand, experienced a 61% annual increase.

Finally, the researchers found that certain areas were hit harder by fentanyl than others.  Overdose death rates rose most sharply along the East Coast, including in New England and the middle Atlantic, as well as in the Great Lakes region.

With opioids ravaging the country, fentanyl has become the leading cause of overdose deaths.  As such, the researchers hope that understanding national trends and patterns for fentanyl-related overdose deaths may inform public health policies and practices moving forward.