Confessions of a Drug Dealer

Is being a real-life drug dealer, instead of one characterized on TV like Walter White of “Breaking Bad” or Avon Barksdale on “The Wire,” filled with similarly unbelievable experiences? Regular run-ins with the law, territorial battles with rival gangs, disputes over splitting profits – the scenes producers, directors, and writers of several popular TV series have placed fictional drug dealers in time after time.

Do these scenarios ever unfold in reality? After surveying over 240 self-identified drug dealers, we found out just how close their reality is to TV’s vision. Read on to see the confessions of real drug dealers and just how much fact is present in Hollywood fiction. Keep in mind while reading this article that the presented data is representative of only those who took our survey. While our sample is appropriate given the population size, a more in-depth look into this topic could provide more insight into drug dealing in America.

Profile of a Dealer 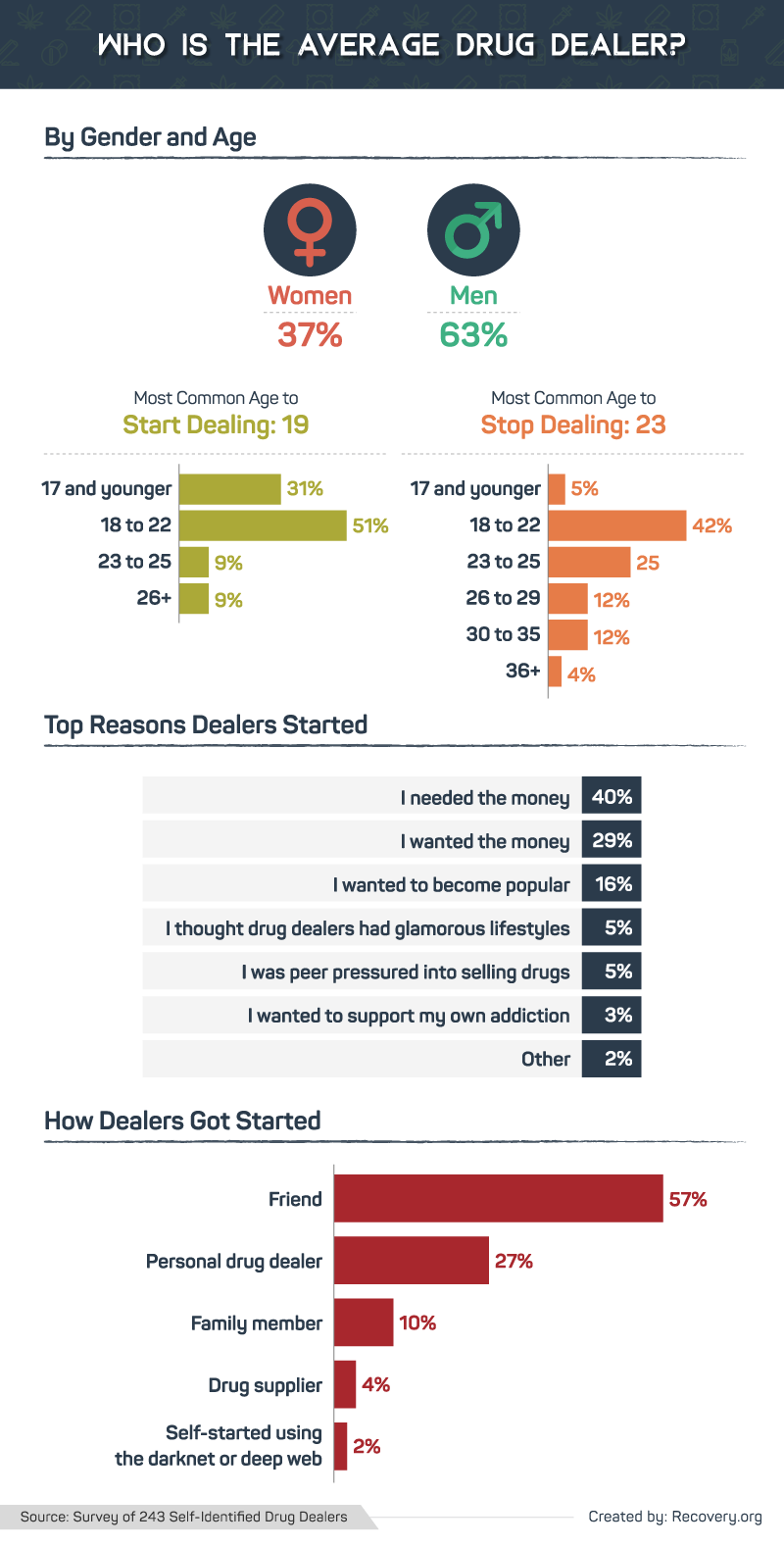 Dealers typically started the trade around the age of 19 and were more likely to be male. While not impossible, it would be less likely to run into a real-life dealer resembling lead character Nancy Botwin from “Weeds.”

Although women represented the minority gender of drug dealers, research shows they may employ behaviors considered to be innate to both women and men. Actions, such as flirting or dressing up to appear more inconspicuous, are often coupled with typical masculine behaviors to co-exist in this male-dominated dealer culture.

Almost 70 percent of respondents indicated that money was the primary motivation for taking up dealing drugs. It’s money, both as a want and a need, that drove dealers to get into the business. Just behind that was the belief that dealing drugs made the dealer popular: 16 percent cited this motivation.

Makeup of Their Clientele 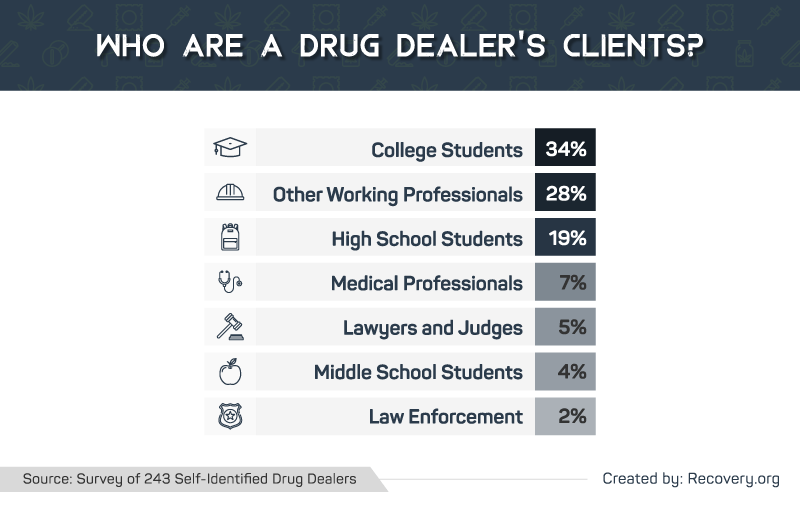 On HBO’s “High Maintenance,” we see a fictional drug dealer known as “The Guy” engage with clientele from many different walks of life. Are real-life dealers dealing with an equally diverse customer base? Over 30 percent of respondents’ customers were college students, and 28 percent were working professionals. This aligns with the daily marijuana use among full-time college students being at its highest levels in over 20 years as of 2016, according to the National Institute on Drug Abuse.

Do Dealers Even Care? 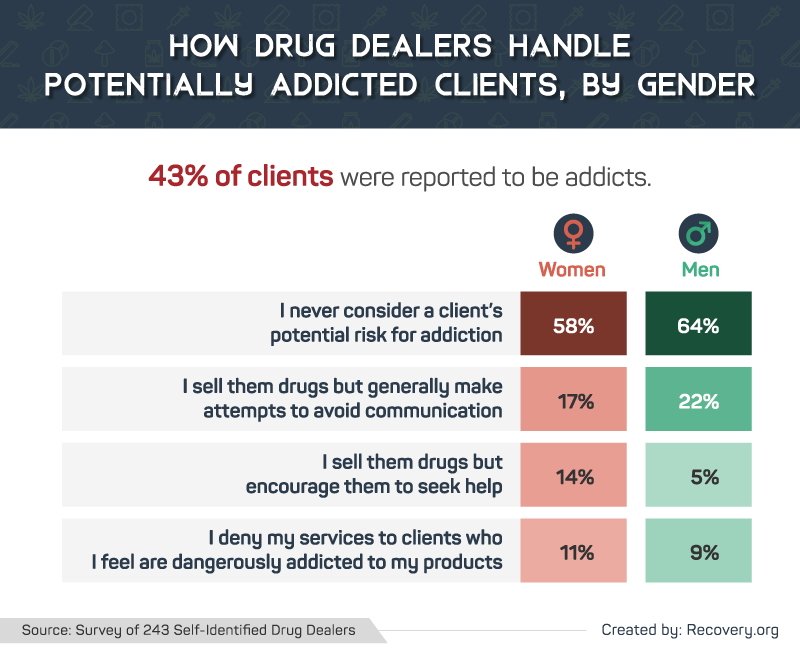 Male drug dealers can be labeled as less caring about their clients’ risk for addiction. Sixty-four percent never considered the habit-forming effects of continued drug or substance use, six percentage points higher than female dealers with the same disposition.

The second most popular way male and female dealers managed addicted clients was through avoiding communication. Perhaps out of sight, out mind helps dealers to minimize the personal connections they may otherwise make among their customers.

Almost a quarter of female dealers either refused service to clients they believed to be “dangerously addicted” (11 percent) or sold them drugs while encouraging them to get help (14 percent). Less than 10 percent of male dealers approached their customers with either of these levels of compassion. 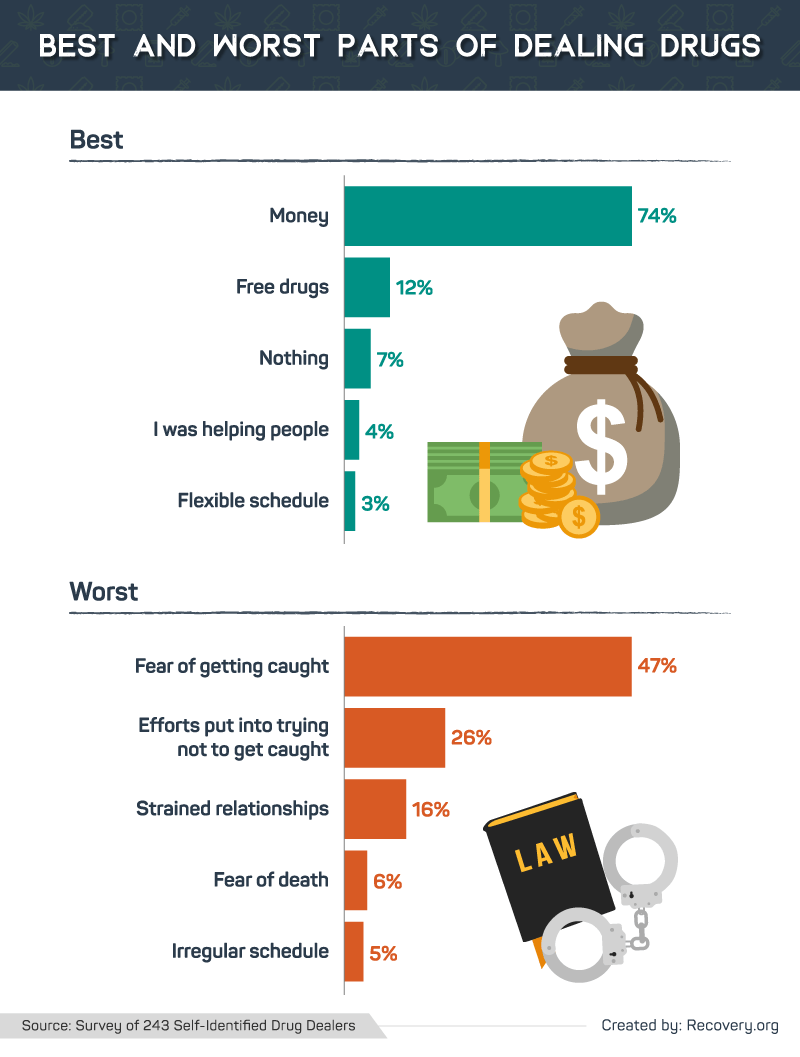 As of 2018, 11 percent of U.S. workers shared the fear of being laid off within the next year. This isn’t a fear shared by drug dealers though – they’re afraid of lockup over layoffs. Almost 50 percent said the worst part of their job was the fear of getting caught.

With more than 1.5 million arrests for drug-related violations in 2016 – 15 percent of which stemmed from the sale or manufacturing of drugs – there is definitely a reason for concern. On top of that, laws vary by location and jurisdictions. Perhaps it’s no surprise that the reportedly second worst part of being a drug dealer was the effort put into not getting caught. When it came down to what dealers enjoyed about their work, money was the favored aspect for over 70 percent of those surveyed.

Paying for Their Crimes With Time 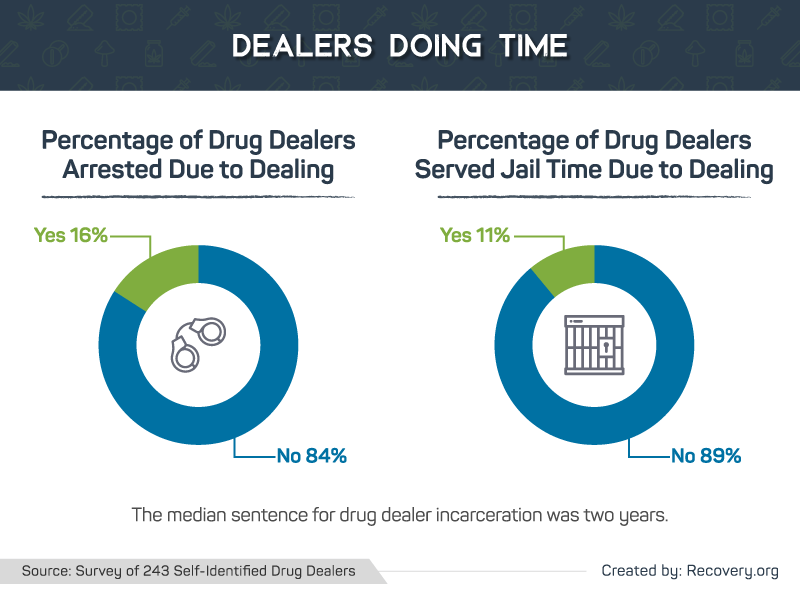 Depending on the associated charge, there are wide-ranging sentences for dealers. Nearly 90 percent of drug dealers said they had never served jail time for their activities. That’s right – despite one of the worst parts of the job being the fear of getting caught, it might not really be as big of an occupational hazard as dealers fear. Only 11 percent of surveyed dealers had been booked for their crimes. With over 81,000 individuals currently serving time in federal prison for drug-related offenses, the number of convicted drug dealers may be much lower than many would assume. For those who did find themselves behind bars, the median sentence was two years. 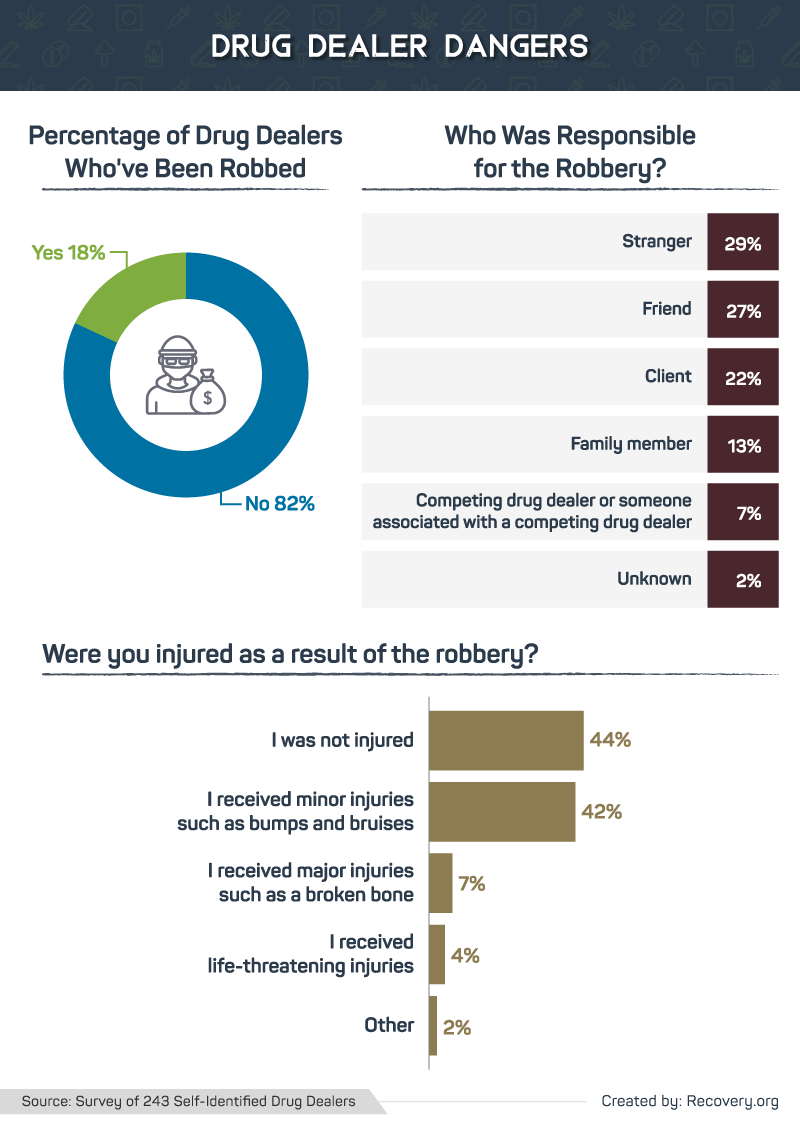 While a vast majority of drug dealers may not spend a minute of their lives behind bars, more have been victims of crimes themselves. Eighteen percent of drug dealers had been robbed – making it a rather unfortunate occupational hazard. While strangers who targeted these drug dealers represented the largest individual group of robbers, the combined percentage of familiar faces – friends, clients, and family members – made up 62 percent of those who stole from dealers. Drug dealers reported that while this crime did hit them in their pockets, it didn’t always come with physical consequences. Forty-four percent reported no injuries resulted from being robbed. 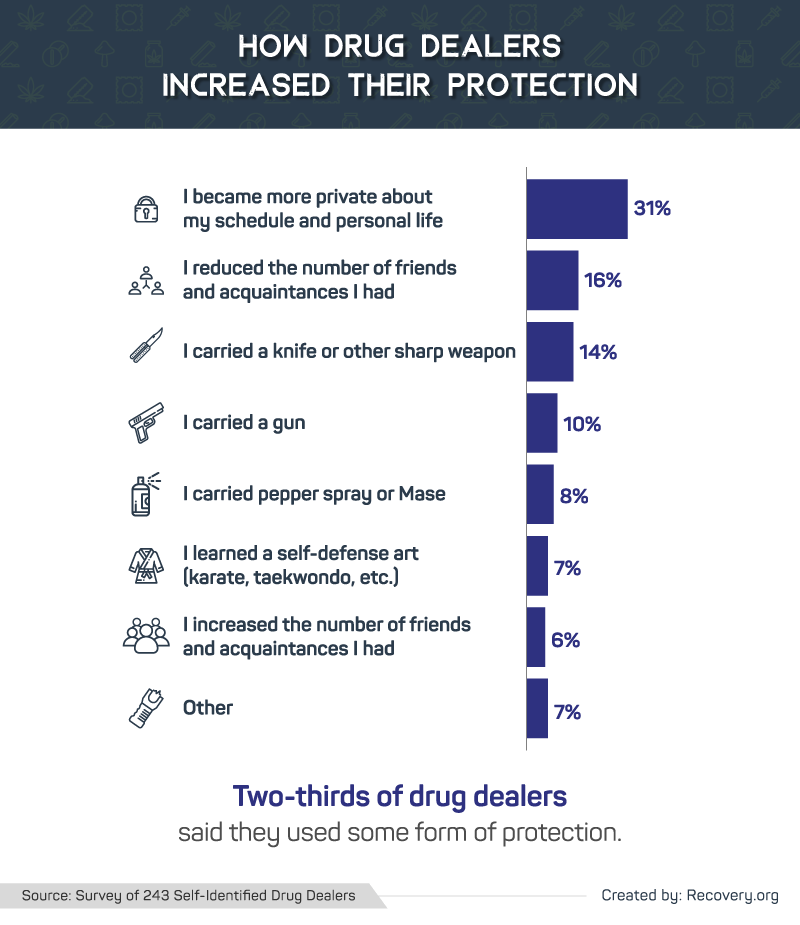 While some TV shows may connect dealing drugs with guns, only 10 percent of dealers admitted to carrying a gun for protection. Knives were used more regularly – 14 percent of dealers made them their protective weapon of choice. Nonlethal forms of self-defense, such as pepper spray (8 percent) and martial arts (7 percent) were also cited as options for protection. However, the primary form of self-preservation came from shrouding their personal life and schedule in a level of secrecy, which almost one-third of dealers used to increase their safety. 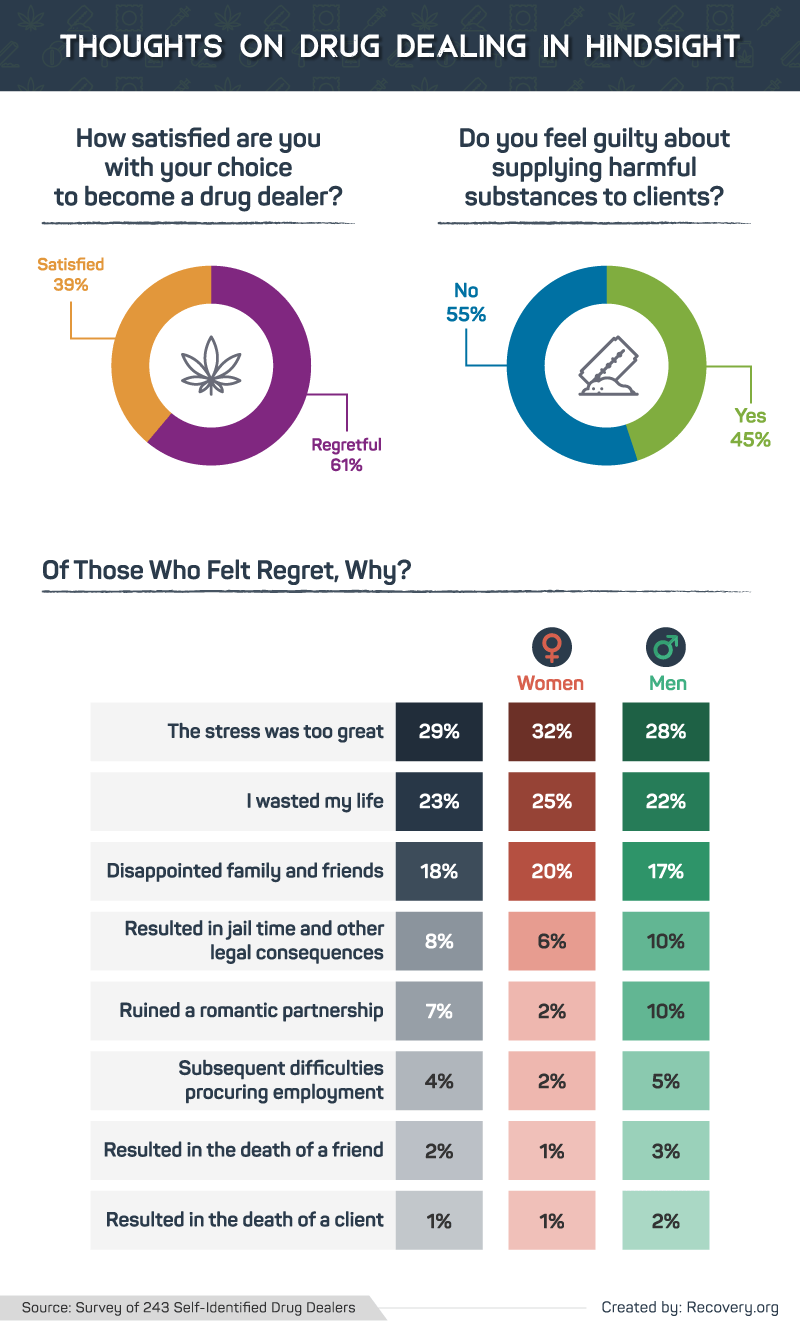 When it came to guilt, only 45 percent of dealers experienced this personal dilemma when reflecting back on their decision to sell harmful or deadly substances to their clients.

While there are portrayals of drug dealers in movies and TV that go from glittery to glamorous, the reality appears to be much different.

For those involved with substance use, timely intervention from qualified specialists and doctors can be crucial in helping to break the hold of addiction. Recovery.org offers essential information and education on drug addiction treatment.

We surveyed 243 people in the U.S. on their experiences dealing drugs. Sixty-three percent of respondents were male, and 37 percent were female. This survey required respondents to have sold drugs at some point in their life and relies on self-reporting since we weren’t able to independently verify information submitted in this survey. There are many issues with self-reported data such as selective memory, telescoping, attribution, and exaggeration. Further research should be done on this topic to draw deeper conclusions.

The survey contained an attention-check question and a disqualification. If respondents failed to qualify or if they were clearly not paying attention to the survey, they were excluded from our analysis.

We encourage you to share this project, produced by Recovery.org, with your audience for noncommercial purposes only. If you do share any of the findings in this project, please make sure to link back to this page so that our team receives credit for the work.