Leah Miller is a mental health counselor and is trained as an alcohol and substance abuse counselor. Her clinical experience has included inpatient and outpatient treatment, and severe mental illness in residential and community settings.

She currently works as part of a residential transitional support team, and dedicates her free time to writing about substance abuse issues.

LSD Withdrawal And How To Quit

Lysergic acid diethylamide (LSD) or “acid” is a potent hallucinogen, manufactured as an illicit street drug. Even in small doses, LSD can have long-lasting effects on sensory perception, seriously impairing a person’s level of functioning.Quitting LSD can be challenging, learn how to make it through acid withdrawal below.

LSD Withdrawal Symptoms and Side Effects

LSD doesn’t cause physiological dependence, as such the withdrawal symptoms of LSD are typically not physical. The drug acts on different areas of the brain than other common addictive drugs, such as heroin and cocaine.1,2 However, tolerance to the drug develops rapidly and requires you to take more and more LSD to get the same effect. 1,2 This is dangerous due to the unpredictable effects of LSD.

While physical dependence does not occur with LSD, some people become psychologically addicted to the drug and feel compelled to use LSD regularly, even when it is causing problems in their lives.

In addition, people who use LSD are often “poly-substance” users. They may abuse multiple drugs either simultaneously or at different times than they use LSD. 2, 5 If a poly-substance user quits using LSD while also stopping the use of a physically addictive drug, such as cocaine, the person will still experience withdrawal symptoms from the physically addictive drug.

Is It Dangerous To Stop LSD Cold Turkey?

Although an LSD user will likely not experience physical acid withdrawal symptoms upon quitting, many seek professional detox programs to provide a safe, comfortable start to substance abuse treatment rather than trying to quit “cold turkey.”

LSD users and poly-substance users often have a higher rate of mental illnesses – including depression, anxiety and schizophrenia – than the general population. 3,5 Hallucinogen users are disproportionately represented in psychiatric inpatient facilities, 2 suggesting that people who use LSD are more likely to have major mental illnesses.

Left untreated, these mental illnesses can complicate LSD recovery. A person may self-medicate with additional drug or alcohol abuse or experience suicidal thoughts and potentially harm themselves. Entering a formal treatment program for LSD can help to prevent some of these dangers and offer a solid chance for long-term sobriety.

How to Help an Addict Quit


If you care about someone who is addicted to LSD or other drugs, the way you approach them is critical. If you make the person feel defensive, it could lead to an argument or the person shutting you out of his or her life.

Approach them from a genuine place of care and concern, rather than being angry, judgmental or confrontational. To do this, you may:

To quit LSD, you must first develop the motivation to stop using the drug. Some strategies to increase motivation include:

Stopping LSD use is only the first step to recovery. To avoid an LSD relapse and maintain sobriety from the drug, one must take active steps to create a healthy and fulfilling lifestyle without drug use. These actions may include:

Can You Get Flashbacks From Using LSD? Flashbacks can occur without warning and may be pleasant or extremely jarring. For some people, repeated flashbacks cause significant distress and impairment in social and occupational functioning, a condition called hallucinogen persisting perception disorder. 1

Why Do People Commit Suicide While on LSD?

The hallucinogenic experience on LSD can be labeled a “good trip,” which is generally a pleasant experience, or a “bad trip,” which can be terrifying. The type of trip a person will experience is extremely unpredictable and may vary each time a person uses LSD.

In the case of a bad trip, a person may feel acute anxiety and experience severe, terrifying thoughts of losing control, going insane or dying. 6 During a bad trip, a person may act violently and irrationally and could injure or even kill themselves or others. In addition, a person under the influence of LSD may experience grand delusions in which he engages in unsafe activities, such as jumping off a building because he thinks he can fly. 2

What Are the Long-Term Effects of LSD?

The long-term effects of LSD include:

In long-standing, heavy LSD users, some signs of psychosis may persist long after their last use of LSD. These include visual disturbances, disorganized thinking, paranoia and mood disturbances. 1

LSD is the most potent of the commonly abused hallucinogenic drugs. It causes profound distortions in a user’s perception of reality.1,2 While LSD addiction is not common, people who use LSD are more likely to abuse other drugs and to struggle with concurrent mental health issues. 2 These factors put them at higher risk for complications that require treatment.

Those abusing LSD – especially in conjunction with mental health problems or abuse of other drugs – may benefit from professional substance abuse treatment. Treatment can help you understand the underlying causes of your addiction while managing any serious medical or mental health problems.

Specific treatment approaches will vary. For example, those with poly-substance abuse issues and/or dual diagnosis mental health concerns can pursue specialized treatment to address those issues at the same time. 3 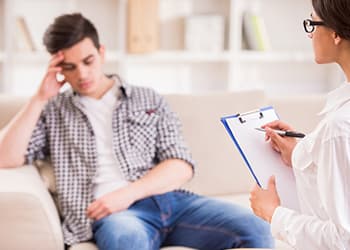 Options for treatment include:

The right treatment will depend on:

Generally, if you’ve been using LSD for a long time, abuse other drugs and suspect you may have mental health problems, inpatient is the best option.

Continue Your Recovery With Aftercare

Following treatment, it is important that you prepare and follow a comprehensive aftercare plan to avoid relapsing on LSD or other drugs. An aftercare plan is usually developed when you are in treatment. Aftercare services can help you manage the areas of your life that were affected by your drug use.

If you or someone you know is struggling with LSD or another drug addiction, call our toll-free helpline right now at . A recovery support advisor will provide information to help you find a treatment center and confirm your insurance coverage. Phone lines are staffed 24 hours a day to connect individuals who are struggling with addiction with the help they need.