Penni Feiner
Author
Penni Feiner is a licensed Kundalini Research Institute-certified yoga teacher, as well as a LifeForce Yoga® level II practitioner. Having completed her first 200-hour teacher training at Naturally Yoga in Glen Rock, New Jersey, in 2004, Penni integrates sacred sound with movement, encouraging participants to open their hearts to explore their own inner songs. Her Bhakti yoga experience includes studying with Jai Uttal, Snatam Kaur, and Guru Ganesha. Penni’s CD, With Gratitude from My Heart to Yours, was released in December of 2014 and is available on iTunes. With a new CD in the works, Penni will explore Mantra and Mindfulness Through Music: A Journey to the Center of Positive Psychology. Penni is a member of two Kirtan bands: Vayu and Rasa Lila. Penni serves as Executive Director of Kula for Karma, a 501c3 not for profit community of yoga teachers who offer yoga to people challenged by illness, abuse, neglect, addiction, and other life obstacles. She co-teaches a workshop at Kripalu called “Finding your Passion” with Geri Topfer, Founder and President of Kula for Karma, and has developed five Kula for Karma Advanced Teacher Training modules in collaboration with Geri Topfer, Charlotte Stone, and Nancy Candea.
Helpful Reading
1
Detoxing
2
About Inpatient
3
28- and 30-Day Programs
4
90 Day Programs
5
Paying For Treatment

A Journey From Cocaine to Kirtan

It’s been almost thirty-three years since the day I realized that if I didn’t find a way to permanently put down my freebase pipe, I would probably find myself dead.

I first started using drugs during my college years at Colgate University. It was 1970, and I was in the first class of women – thrilled to be a member of a women’s consciousness-raising group, carrying the torch that Gloria Steinem and Bella Abzug had lit for us.

Though serious about our studies, we were just as serious about our parties…dabbling with marijuana, hashish, Quaaludes, and once in awhile going crazy with a line or two of cocaine. Those were the days of singer-songwriters and folk music, and I fancied myself an up-and-coming musician. I traveled easefully with guitar in hand, a stash in my pocket, singing on the radio, in coffee houses, and at parties, while simultaneously masking my fear of performing with a hit of this or that before taking the mic into my hands. In 1974, I graduated from Colgate and went on to Cornell for graduate school. I married my first husband and together, we set out to change the world through alternative education. I thought I had my life under control.

After some time, our best friends moved to Englewood and suggested we move nearby. We left Cornell to join them, but the move from a small rural town like Ithaca to the bustling, commuter town of Englewood proved very challenging for us, and our already fragile relationship came to a screaming halt. With the divorce in my rearview, I began my life as a 26-year old liberated, single woman.

For the next four years, I used drugs regularly. I would leave for work every morning ready to give it my all, and by nightfall, I was running home eager to escape. I felt isolated and disconnected, even from myself. My self-esteem was low. My anxiety, unbearably high. My friends were worried about me. My family was oblivious, and I was the queen of denial. I was desperate, scared, crazy…spending thousands of dollars on cocaine. When the drugs ran out, I would scrounge around picking through shag carpeting looking for remnants, calling my dealer, then jumping in my car to score some more.

The other morning, during my meditation practice, I remembered my turning point. I had been free-basing in my kitchen when suddenly, my heart began beating out of my chest like a jazz band had taken over my body. At thirty years old, I was in great physical shape, a runner by day and a free baser by night, and I remember thinking: if I have to take myself to the ER, how will I explain how a nice girl like me ended up like this?

That turned out to be my first Atrial Fibrillation event. It was that next morning that I decided to quit. I broke my pipe, flushed whatever drugs were left down the toilet and made myself a promise. For three weeks, I stayed clean, white-knuckling my way through it. Without any tools, I sat alone, desperate and determined not to pick up.

At the end of those three weeks, I reached out for help. I found Regent Hospital in Manhattan, joined an outpatient group and started on the path to sobriety. Back in the day, the approach for healing and recovery was primarily mind-centered. There was little focus on the body. My group met twice a week for two years and all of us were encouraged to find a twelve-step program in each of our respective neighborhoods. I watched group members – who became dear friends – come and go, overdose, die, get married, have children; only about 20% of us actually turned our lives around, finding new ways to re-channel our energy in positive, productive ways.

It was the twelve-step program that kept me on my path. I became treasurer of my meeting, and connected with my sponsor on a regular basis. 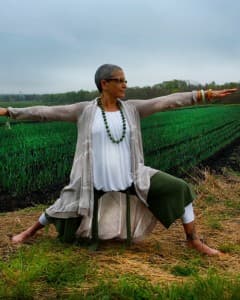 My “type A” personality was redirected, allowing me to surrender to my higher power while exploring my demons in talk therapy. I committed myself to being honest with others and most importantly, to getting real with myself. In place of denial, I made room for awareness and self-observation, and little by little, I began to heal my wounded sense of self-worth.

When I walked into my first yoga class, my sole focus was on strengthening, toning, and finding flexibility. If the class was 90 minutes long, my mind would race for 85 minutes, and maybe, just maybe, I would have five minutes of peace and quiet. But something still kept me coming back.

Over time, I began to experience longer periods of stillness, and the flow from one pose to the next became a moving mediation.

In every studio I visited, I wound up sitting under the speakers and finding calm in the music of yoga. In downward dog, I would quietly sing harmonies with the artist, their voice ushering me from one asana to the next. We worked on breathing and balance and single-pointed focus. We worked on letting go of self-criticism, self-judgment, and self-limiting beliefs. I began to feel connected: connected to myself, connected to a new community of yoga friends, and connected to my teachers. The isolation, the loneliness, and the desperation…it literally melted away.

One day, my teacher heard me singing and invited me to sing with her. Our voices blended beautifully. We met to rehearse, and over time, formed a little Kirtan band. Kirtan is a different kind of music that is based on ancient chants and has the ability to quiet the mind if listened to with intention. I learned about the music of yoga and the Bhakti practice. Bhakti is about devotion, about mantra, about intention, about creating new neural pathways. It’s become an integral part of my daily practice.

Today, as I approach my 33rd anniversary of sobriety, I use all of these tools on a regular basis. Every morning, I begin my meditation practice with a half hour of chanting. Chanting with the guitar, I move from my couch to my meditation cushion, and then chanting with the harmonium, I sit in stillness and silence for another twenty-one minutes.

Chanting with the guitar, I move from my couch to my meditation cushion, and then chanting with the harmonium, I sit in stillness and silence for another twenty-one minutes.-Penni FeinerIt is in the silence and the stillness that my creative spirit soars, that my self-esteem repairs itself, and I set myself up to reach my highest potential.

Today, my energy is focused on healing others and sharing these tools with the world. I serve as the Executive Director of Kula for Karma. Kula for Karma pioneers the integration of therapeutic yoga, meditation, and stress management into mainstream medicine and healthcare.

As a nonprofit organization based in the New York metropolitan area, Kula for Karma offers programs, at no cost, to populations in need who face physical and mental health challenges. In this role, I get to observe on a daily basis the magical, long-term, healing powers of a consistent yoga practice. I see agitated, anxious, angry students – much like I once was – transform themselves. I see hopelessness and darkness shift to empowerment and light. I see impulsive, reactive behavior shift to mindfulness and self-compassion.

With a steady diet of yoga, I’ve learned how to turn obstacles into opportunities, challenges into change, stumbling blocks into steppingstones, and losses into gains. Thirty-three years, and counting…