Codependency and #MeToo: A Brief History of Abuse

When we look at the history of women as it relates to men, we see that it has only been in the last 100 years that we were given rights. Before we had rights, women and children were the property of men. Men could do with us whatever they pleased, whenever they pleased. This included all forms of abuses: sexual, physical and emotional. Having no rights, we were groomed to be compliant, to obey, to serve, to not speak up, to not have a voice, and generally be an extension of the man. Both church and state enabled and didn’t interfere with this paradigm.

There were start and stop efforts, but the abuse laws did not really gain “teeth” until around the middle to late  20th century. Around this time, money was allocated to professionals and agencies to identify abuse, educate people about abuse, and begin to enforce the laws which made it illegal. It would be nice if once a law was passed, it would be obeyed, but as we can see almost a century later that is not the case. We still have large systems (e.g. Catholic Church and military) where they are allowed to “take care of their own” and thus these systems just enable the abuse to continue.

Some of the belief systems that must be changed and challenged are:

If I have been able to control all the people around me, and I sense someone is going to take that control away, guess what I am going to do? If I am not ready to give up, I am going to fight!

Again take a look at the Catholic Church, a system which has maintained severe inconsistency in addressing this pervasive issue.  It is a system which continues to “fight” to take care of its own, and in doing so enables them to commit abuse.  In this day and age no system should be above the law, and abuse should be tried by a judicial system. Why is this distinction important? This is the power of denial, enabling, and control that all those abused have to have the courage to confront.

Another challenge the abused will face is “all fingers pointing in their direction”:

The doubting questioners continue. They represent the history of denying and enabling. They enable the paradigm of abuse was legal. They forget sexual and physical abuse are illegal now!

Now let’s look at the phenomenon of codependency.  We are going to stick with our understanding of codependency as a system of distortions that exists on a continuum. Codependents learn personality traits that interfere with knowing one’s self and others. The people pleasing aspect of codependency might drive the ignoring of who we are trying to please. The focus of wanting others approval may keep us from acknowledging there might be abusive behavior coming from the person whose approval we want.

The need for harmony might prevent us from realizing we may be enabling abusive behavior. Or any combination of the above.  We don’t have the tools to deal with abusive behavior, so this also drives us to avoid bringing it to consciousness. And we probably have a history of being abused or exploited so it feels familiar. We add these traits to our history of being property which taught us to be compliant, obey, no rights, no voice, serve, be the extension of the man and we are completely groomed and ready for sexual abuse.

The #MeToo movement has given the abused strength in numbers, solidarity, an energy to join, an awakening, and so much more. Having the right to say “No” is not enough. As you can see from the history of denial and enabling, no one is going to 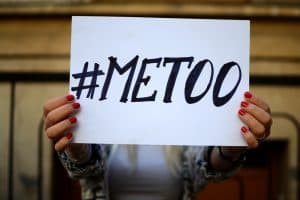 “Whenever one person stands up and says,’ Wait a minute, this is wrong’ it helps other people do the same.” ~Gloria Steinem

thank you when you say, “Stop Now” or “What you did to me is wrong”. The only thanks you might get is from another abused person who may borrow your courage to find her own.

Those who like the old paradigm may get vicious. Changing this paradigm is going to take generations. There are many who will go to their grave holding on to their right to abuse others. Once you are free from them, focus on educating and being with those who honor everyone’s rights.

In Part Two we will give you tools to live in the new paradigm.