Tori Utley
Author
Tori Utley is an entrepreneur working jointly in technology innovation and addiction recovery, holding an M.B.A. and an addictions counseling license in Minnesota. By day, she works as a mobile Product Manager at Mayo Clinic and is working with the Department of Psychiatry and Psychology on a new mobile application for mood monitoring and mental health. Outside of Mayo Clinic, she is the Founder and CEO of an early‐stage tech and social venture startup company, Tinua, with the goal of reducing monetary waste by reallocating for social impact. She is also the Founder and Executive Director of More Than An Addict, an organization committed to the reduction of addiction stigma through promoting education, employment, and entrepreneurship for individuals in long‐term recovery, as well as the Co‐Founder of an upcoming innovation to addiction treatment and sober housing, with the goal of keeping recovering individuals “safe, sober, now.” In addition to her work with addiction recovery, she is a Contributing Writer with Forbes, maintains participation with the Forbes Under 30 Network, and serves as the Director of Strategic Engagement at Mission 21, an anti‐trafficking organization in Minnesota.
Helpful Reading
1
Detoxing
2
About Inpatient
3
28- and 30-Day Programs
4
90 Day Programs
5
Paying For Treatment

I’ve said it before and I’ll say it again – I believe people in long-term recovery are some of the best leaders and entrepreneurs you’ll meet. Resiliency, tenacity, hard work and determination are just a few of the traits recovery requires, and are often the same qualities that differentiate between a good leader and a great one.

And while I hope this will one day be backed by solid evidence, right now this belief is backed by observation, and for many, lived experience. Janie Deegan knows this all too well.

Janie is an NYC-based culinary entrepreneur and baker, running an online bakery business Janie Bakes where she creates baked goods for people across the country, and is most known for her famous Pie Crust Cookies. In November 2017, Janie was chosen as recipient of the Stacy’s Rise Scholarship, a $10,000 scholarship and training opportunity for female culinary entrepreneurs.
Janie’s childhood dream was to use her creative gifts to open a bakery in NYC. And while Janie has been working towards this goal and living as a person in long-term recovery for the past 4 years, it hasn’t been an easy journey.

This is her story of recovery and resiliency. 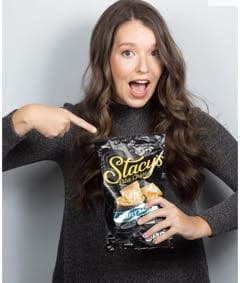 After growing up in a loving family in New York City, Janie studied theater in college. She says she never fit in and felt like she wasn’t good enough, which led to her drinking more and more. After experiencing a bad relationship and drinking to cope, she found herself battling a drinking problem, even if she didn’t realize it yet.

“I didn’t think there was such a thing as a 22-year-old female alcoholic – I didn’t have any people in my life who struggled with alcoholism, and there’s still such a stigma to be an addict or alcoholic as a young person,” she says.
Before she knew it, the reality of addiction hit Janie full-force.

She didn’t have a job, she was homeless and was bouncing around from couch to government funded treatment center to halfway house. But by the time she turned 25, Janie says things began to change.

“I didn’t believe there was a sober place for me in life,” she says. “But when people started to tell me they loved me but it hurt to be around me, I realized I needed to make a change.”

According to Janie, one of the keys to finding recovery was the impact of being surrounded by love and compassion.
“I received a lot of love from people who didn’t dismiss me or let me go completely,” she says. “They created strict boundaries with love and I managed to stop drinking and climb out of the pit of despair.”

Like most people in recovery know, resiliency isn’t built overnight; rather it’s a long journey of learning and growing. So as Janie started putting one foot in front of the other, first came a place to live – then came a job.

“I took out people’s garbage,” she says, stating it was a humbling experience that helped build a foundation of humility in recovery.

And as she continued working and focusing on recovery, she started rekindling her love of baking in the kitchen of her new apartment.

“In college, I used baking as a way to please others – baking treats is a great way to get people to like you,” she jokes. “When I got sober, I was able to refine my love of being creative and combine it with baking for others. And slowly, it started to build up self-esteem I never had.”

Over the next few years, she started getting asked to bake wedding cakes, pies and cookies from people ranging from close friends to nonprofit organizations. And after launching Janie Bakes in November 2015, she’s now working on opening a storefront bakery in NYC.

In 2017, Janie was awarded the Stacy’s Rise Grant, allowing her to train with experts at the International Culinary Center in New York, where she learned critical business skills to help her grow her business and get the word out about her online bakery.-Tori Utley

“Starting this business was a turning point in my life,” she says. “It was a big risk, there was no safety net, but I still learned that if I failed, it would be okay.”

In 2017, Janie was awarded the Stacy’s Rise Grant, allowing her to train with experts at the International Culinary Center in New York, where she learned critical business skills to help her grow her business and get the word out about her online bakery.

Today, Janie uses her gifts in baking as she grows her business, but she also uses her business to give back. She teaches women and children to bake, and she’s also a self-proclaimed ‘future second chance employer,’ where she hopes to help others with a criminal history or past of addiction get back on their feet with a job as she grows and expands.

“I got so many second and third chances – even hundreds of chances,” she says. “I want to be that kind of employer to help people who need a second chance. In my opinion, many of these people end up being the hardest working employees an employer could ask for.”

For Janie, her aspirations to continue growing personally and professionally are many. She shares it’s important to have big dreams but commit to making the small steps to get there – something she’s learned many times. From starting her own business to running her first marathon at 4.5 years sober, Janie’s story is one that encompasses hope and resiliency in recovery and beyond.

Reflecting on her experience running a marathon, Janie says “People used to tell me if I could run a marathon I could do anything, but I think they were wrong – If I can get sober and overcome what I’ve overcome, then I can do anything.”