Knitting Your Way to a Strong Recovery

Since the emergence of pink knitted hats first flooded The Women’s March in early 2017, there has been an uptick in ladies – and some men – of all ages wanting to learn to knit.

This was not my reason for picking it up.

When I was 14 and visiting my aunt in Vermont, I learned to knit. Two days later, when we got home and I messed up, I had nobody to help me, and that was the end of that. I have been meaning to learn again ever since. That half-a-lifetime ago moment vaguely entered my mind while I began searching for ways to have fun living that sober lifestyle back in 2012, but I was too nervous that I’d be left in the lurch again on a mess-up.

Fast forward about six years, and a friend refers me to BIGVISION, a nonprofit dedicated to helping young people find ways to have fun in sobriety, and before I know it, I’ve gotten an email about a free knitting class they host each month for people in recovery.

I looked up at the ceiling and literally yelled “Yay!” 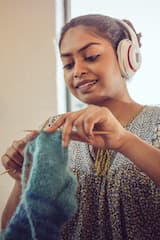 On the first Tuesday of every month, knitting teacher Laurie Kimmelstiel leads the class at the nonprofit’s downtown offices. She’s been working with the group for a year and a half. Yarn, needles, and pizza are all included – and so is the extra help outside class that Laurie offered me via Facebook video chat later that night after I had my first mistake. (She’s provided me extra help through text, email, chat, and messenger in all of the days since.)

I walked in, wrote “Helaina who can’t knit” on my name tag, and had to change it to “Helaina who is now knitting” within five minutes.

During the second class, Laurie told us that many studies point to people feeling calmer and happier as a direct result of knitting, and some more future-forward studies have found that people who engaged in hobbies like knitting resulted in better cognitive functioning and lower rates of memory loss later in life.  In a study of women living with eating disorders, it was found that knitting helped reduce their impulse to “run from their own thoughts.”

“Someone told me they felt like now they were addicted to knitting, but what’s the difference here?” she asked.

Always the front-of-the-row student, I offered, “We’re creating something while we sit with our thoughts, not trying to blot them out.”

Soothing and Creative Outlets in Recovery

Laurie has previously volunteered her services with The Point Program in White Plains working with developmentally disabled young adults, says that people in recovery, just like those who aren’t, can greatly benefit from having a soothing creative outlet that provides an opportunity to do something that requires no judgement, no expectations and no particular gift or skill.

“It somehow provides very quick gratification, a great sense of accomplishment, which is an awesome thing for people who have struggled with lots of failure, disappointment and criticism, not to mention personal struggles with mental illness, anxiety or depression. It Is a great ego booster,” she says. “While watching participants find an incredible sense of calm as they quietly learn this new craft, we can literally see their faces relax, their voices quiet and their hands stop shaking.”

Turns out there are actually a lot of reasons this is great for wellness, whether or not you’re sober – it soothes anxiety and is known to lower blood pressure. Laurie also can’t resist teaching people in other high-stress areas, like the subway or an airport.

“When I knit in public, anywhere be it in an airport or on the subway, I am often approached by individuals who inquire about what I am making or doing. Airports particularly lend themselves to people approaching knitters, we always seem calm and relaxed when others are frenzied and nervous,” she says. “I always offer to teach people to knit, because it has a calming effect on me too and is a great distraction from the noise and atmosphere of an airport or even inside an airline in flight. I’ve taught young and old, opened conversations and offered insight into the joy of creating something from two sticks and some string.”

Well, as it turns out, you can be addicted to knitting, and in a not-so-fun way. About two months in, a glorious monster (me) had been created. I have dozens of yarns and patterns and needles and beads, threads and rhinestones and the necessary accessories.

I ordered way more yarn than I needed, I started too many projects at once, and it seemed like all of a sudden I was making mistakes left and right. I decided I needed to take 48 hours off of knitting, and the fact that the very idea scared me made me realize – yup, you guessed it – that it was probably a good idea.

Fast forward four months, and my relationship is once again healthy. It’s taught me patience – how to not unravel when I have to unravel about 3,000 stitches, which is one of the best life lessons you can experience when it comes to letting go – and how to be patient after I ask for help.

Finding Your Own Healthy Hobbies 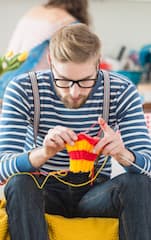 The knitting class kicked off back in August of 2015 with a mix of people early on their recovery and those farther along, groups from sober houses and other programs – some months, it’s all men, large-armed and tattoo-sleeved. BIGVISION founder Eve Goldberg found solace in the craft after her son Isaac passed away from an opoid overdose at age 23.

“The workshop originally started as a way we could do an activity while also giving back to the community, like knitting hats or blankets for the children’s hospital,” she said. “There is a newfound sense of happiness and confidence among students who take the class and return to it each month. For many young people in recovery, they have not felt a sense of accomplishment or pride in themselves in a long time. It’s very rewarding to see their faces light up with they ‘get’ the motion of knitting and start being able to knit rows on their own.”

I’ve become passionate about knitting, but it doesn’t have any negative consequences (except on my bank account) anymore. If anything, it helps me function even better as a human being and gives me a newfound sense of excitement, pride, and confidence. Moderation is important, and so is making sure I don’t go over a certain number of projects at once. I also have seriously hit the limitation of how much yarn I can have waiting in the wings and now delete the sale/promo emails I get in my inbox every freaking day.

It’s kind of the first real hobby I’ve had in my adult life, though, and I’m embracing it. I am part of a nurturing and encouraging Facebook network of helpers in groups who are happy to offer advice and to give you a thumbs up. Women outside of recovery have been incredibly generous with their time via Facebook, teachers like Teri Huet of Knitting101.Org, who also like passing the gift along to others.

We even created a help group together called “In A Stitch: Knitting Emergency Help.” Because, you know, when you’re learning something new, you should never have to go it alone.