In the field of recovery, the methods and supports are as numerous as stars in the sky.  What I have come across repeatedly is that almost every single approach involves some sort of reflection and writing. This may be during the process or it may come at the end, either way it is usually encouraged.  Have you ever stopped to ask yourself why? What is it about writing that makes it the invisible thread between all approaches to helping people overcome obstacles?  For one, I believe it is one of the most powerful ways we can connect with ourselves. It takes us from our mind to our heart and back again. It forces us to sit and be present. And it invites us to delve deep into our pain and our joys.

The Secret Power of Writing

There is something incredibly powerful about finding our voice and using it to set ourselves free. By giving permission to express our authentic experience, we are in essence declaring our truth is valid and mighty. We become the one who grows an iron spine for all that needs to emerge. And with pen in hand, our emotions are given permission to speak without censorship. This is powerful. This is courageous. And this is a road home. 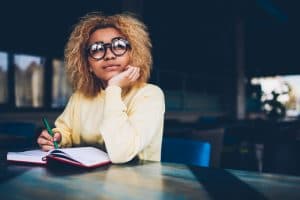 Quite on accident I found writing strengthened my self-identity through taking the stance of “this is me.”   By simply sharing myself with the world, I felt more solid in my views and in my own skin. For it isn’t our presentation of who society tells us to be that strengthens us, it’s the expression and ownership of our truth that makes us untouchable.

I believe this is why many people write. We take our inner-world, create space for it, and let it lead us to the next place that wants to be touched. And knowing full well that I am not the only one who finds value in this, I wanted to talk to others who have used this medium to grow.  I thought of my friend Ian Gundlach, a great writer in his own right, and a man who is often found helping others in recovery.

Ian’s Story of Writing and Recovery

As a lyricist, poet, and writer, Ian has taken his own healing and given it a place to land. Quite divinely, it’s also landed in the hands of others who found inspiration in his words. He was careful to remind me that he is not one to lead in a teaching fashion, but rather someone who wears the wars of his mind vulnerably.  I imagine this to be a teaching of the highest accord.

Ian’s story of addiction started quite young.  He shared that he grew up in a normal household where his father was an active role model in his life, showing him support at his sporting events, encouraging his skateboarding, and was part of the local church community, which the family frequented often.  He worked hard to provide for his family and shared his love for them freely.

Ian said that no one understood the motivation that compelled his father to start abusing drugs. Within six short months his father was absent mentally and physically, while his body and life were rapidly deteriorating. The disease and insanity of addiction, along with his drug of choice, methamphetamine, led his father to burn down the church, overdose and die. Ian was only ten.

Ian found himself navigating his inner and outer terrain on the face of his skateboard, and quickly became recognized for his natural talent.  By age 13 he was a sponsored skateboarder living in the limelight.  Days 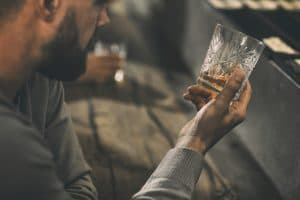 were spent traveling with men 10 to 20 years his senior, and their lifestyle quickly became his own.  He was seen as something great, living as though he was something great, and riding the waves of alcohol and marijuana usage that the others so freely engaged in. By 15 years old, Ian was regularly ditching school and taking dates to bars…. never mind that he was underage, he had connections.

The party continued and Ian and his friends were often in the homes of drug dealers with the gun collections to prove it. One evening Ian received a call that a friend accidentally shot and killed himself at a home they regularly frequented.  “This is when things started to spin out of control for me,” he confessed.  “Teenage angst was in full effect.”  Up until this point Ian had never considered taking hard drugs, the very culprit of his father’s demise.  But with the emotions surfacing and good judgement escaping, Ian decided that he wanted to experience the drug that his father was drawn to.

Ian shared that he was drinking heavily using cocaine on a daily basis as a poor and ironic attempt to cope with his friends dying from accidental overdoses and suicides.  I suppose some would argue that they are one in the same. Theory aside, the constant loss and destruction around him simply provided more reason to use. “Life became a game of live fast and die young,” he told me. He partied hard and escaped the law many times, but of course this was not always the case. No one can outrun their actions forever.

Ian eventually found himself in a string of DUI’s, unhealthy relationships, and getting arrested and thrown in jail. Atlas, the threshold of justifications and excuses met their match, as jail was not something he would tolerate for his life. In the rooms of AA Ian sat with men who had lived like he had and he wanted what they had now- sobriety.  Ian started working the program, got a sponsor, and now has his sponsees of his own.  As they say, he gives freely what was given to him.

Writing as a Healing Process

Ian’s art frequents topics of addiction, recovery, and personal reflection. I started noticing how on social media platforms, people were thanking him for his words and quickly deducted that many of his followers were also in recovery.  Essentially his willingness to share himself authentically, allowed others to open their hearts and face what also dwelled within.  I recall reading something he posted on Instagram with a caption of, “I don’t do it for the likes, I do it for the letting go.”  This simple post showcases that he isn’t trying to be anything for anyone. The only thing he doing is being honest. And what a quiet revolution that is.

Ian takes what he has been given through working his process in recovery and shares it with the world. And then he digs a bit deeper. He looks within beyond the questions and moral of the 12 steps, finds his own tapestry of wisdom, and pours it into his art. I think this is what inspires others in recovery. It’s as if there is a free permission slip being handed out through his example. It reads: There is nothing to be ashamed of. You are not broken. We are all human. Accept yourself and set yourself free.

Ian told me that as a writer, his pen and paper were his instruments, just as a musician structures chords and harmonies.  “I am able to dissect the discord of my mind and create positive solutions by processing my thoughts, an in return this balances my emotions,” he told me.  He sits at his antique typewriter and is forced to pause. He is positioned to become present every time he writes, and for Ian, this is everything.  We discussed how our minds are like conveyer belts that when not trained or interrupted can actually be quite harmful. We discussed how society feeds us who we should be, and the subtle ways we adhere to it if we are not paying attention. For Ian, to sit and type, is to sit and question the conversation that is currently parading through as if it’s an authority figure. In turn, he right-sizes it and becomes the creator of his reality. It is his time to let his heart and soul speak.

I believe that writing is a healthy way for us to process our emotions. It strikes a balance between pausing and moving forward in a precise and gentle way. We become the space holder and the one being held simultaneously.  We can use it however serves us in the moment. We can keep it to ourselves or use it to build bridges that thread humanity together by discussing how deep down we are all really more alike than different.

In recovery, journaling and writing exercises are common in all arenas. This can be in a 12-step program, SMART programs, therapy, treatment facilities, support groups, and other healing modalities. Writing allows us to connect with our heart in whatever way serves us best. There is a chance to self-reflect, create art, or pour our tears through our fingers onto the paper. It is such an incredibly simple medium with infinite 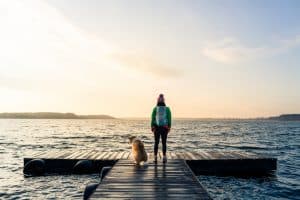 possibilities for healing. Its only request is that we stop long enough to face our authentic experience, and in doing so we walk away with a deeper connection.

To learn more about Ian and follow his daily inspirational posts for those in recovery, as well as those who simply want to better their minds, I invited you to follow him on Instagram. You can find him by using his handle: @iandgundlach.  Ian and I both agree that you don’t have to consider yourself a writer to write. After all, we don’t write to be good, we write simply to write.