Taking CBD in Recovery: Are You Still Sober?

Moving to a state where cannabis was legal was mind-blowing at first. It reminded me of when I first got sober in England: I became acutely aware of a pub on every corner, that was now suddenly out of bounds. The only difference in Portland was that there was a dispensary on every corner. I found it rather alarming, if I’m honest.

That unease prompted me to get curious as to why I was so frightened of a substance that had never caused me any harm. As I started to investigate further, I discovered that not only was it wildly popular here, but it was frequently taken by people in recovery. Despite the benefits though, some people in recovery would argue that taking cannabidiol (CBD) could adversely impact their sobriety. 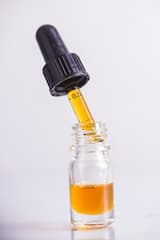 I found sobriety in a 12-Step fellowship. It was because of that grounding in recovery that I adopted their abstinence-based mindset.

The guidance was clear: anything that resembles a drug – even if it wasn’t your drug of choice – you don’t take it. That mindset was so firmly fixed that you were even advised to check with your sponsor about whether you should take your doctor’s prescription for a genuine medical need.

By the time I arrived in Portland, some five years later, that abstinence-only mindset was fairly ingrained in me. It’s fair to say that I was totally ignorant to CBD and couldn’t even comprehend the possibility of people in recovery taking another substance, while remaining sober – that went against everything I was taught. That’s one of the glorious things about Portland: it loudly challenges your biases until you’re faced with your own ignorance.

I had to find out more, so off I went to research CBD, its effects, and how it affects the body.

CBD stands for a cannabidiol—which is simply one of the 400 compounds found in a cannabis plant (60 of which are unique to the cannabis plant). CBD is popular due to its wide ranging medicinal and therapeutic effects.

The key facts to know about CBD are:

Having discovered these facts, I couldn’t understand why taking CBD therapeutically was so controversial for people in recovery. A quick look online and you can see people questioning others in recovery who take CBD and claiming they cannot take their sobriety seriously – that they’re risking relapse – despite scientific evidence to the contrary. There seems to be this overwhelming fear that the taking CBD might be triggering and lead to picking up another substance.

Looking to investigate further, I took a quick poll on Facebook, to ask others views of taking CBD and its impact (if any) on their recovery and several people came forward. Some were concerned about the risk that it may trigger a relapse, but overall many were in support its use, saying it helped them tremendously.

Tracy Murphy, told me about her first-hand experience of using CBD to deal with PMDD and depression:

“I started taking CBD oil recently due to depression and anxiety that is brought on by my PMDD. As soon as the very first day I could see results. I use a broad-spectrum CBD oil that may have slight traces of THC – less than 1%. It not only helps my cramps when I have my period but, it also elevates me out of anxiety and depression enough that I can properly take care of myself by getting regular sleep, healthy food and, exercise.

All of these things together help me to function better than I have in years, with no side effects. I think the best visual I can draw is that before, it felt like I was constantly walking through chest deep water. My legs didn’t want to move, my arms didn’t swing, everything was a ton of effort and slow. Since I’ve started taking CBD oil, I feel lighter. My legs want to move fast, I want to do things and take care of myself, I have extra energy to tackle the projects that have been on my to-do list for months. I have tried to help myself through diet changed and exercise before but, never with results like this. The CBD oil was the missing piece. It’s helping me be the me-est me I can be!! “

I can’t help but be swayed by the positive experiences of those in recovery who benefit from the therapeutic use of CBD to conclude that it is an option for me if ever I need it. I realized, as I continued to question these biases, that it was this abstinence-based mindset that was the cause of disagreements – in the same way that proponents of this mindset are intolerant to medication assisted treatment, or moderate drinking, even though these people have returned to a good quality and fulfilling life. But once you get past that fear-mongering and ignorance, and instead look at the evidence and the experience of others, you could quite easily conclude that it could be used as a tool to enhance wellbeing in recovery.