The Gift of Uncertainty

The idea of certainty, of being certain, is usually assumed to be a good thing – a positive. To be certain is to know beyond a doubt, beyond question, to be indisputable.

This article, through story and through example, will argue that certainty, at the least, is limiting, and at the most, may get you drunk or loaded.

Certainty and its Effect on Recovery

“Certainty” certainly has the ability to close our minds. If we are certain about something, there is no reason to be curious, and no reason to entertain or consider other points of view or other possibilities. Our natural quality of being explorative can be shut down by certainty, and we end up comfortable in our rigid beliefs – comfortable but unteachable.

If addicts and alcoholics think of themselves, and/or identify, as a “chronic relapser” or a “retread,” and are certain they will not stay sober, then they close themselves to having a new experience or to trying something new or different. And we’ve all heard: “If you keep doing what you’ve always done, you’ll keep getting what you’ve always gotten.”

…certainly has the ability to close our minds. If we are certain about something, there is no reason to be curious, and no reason to entertain or consider other points of view or other possibilities.-Jay WestbrookIf an addict is certain that drugs are a problem, but that alcohol is not a problem, then they may very well drink. Most of us know, experientially, that when that happens, the alcohol often (but not always) leads to drugs. In Cocaine Anonymous, for example, new members may claim that their problem is cocaine, but that alcohol is not a problem for them, therefore they’re not going to stop drinking. When they say that, they are often told (only somewhat jokingly) by other members that alcohol may not be a problem for them, but that it is a problem for their car – because when the member drinks alcohol, their car drives straight to the crack house – LoL.

Certainty can also strengthen denial. If someone is certain that they are not an alcoholic, and certain the problem is that they are chronically over-served, then they are far more likely to change watering holes than they are to go to an AA meeting.

Similarly, there’s the story of the two guys – a “normie” and an alcoholic – both arrested for DUI at the same Sunset Blvd. sobriety checkpoint. When released from jail the next morning, the normie looks around and says with great uncertainty, “I shouldn’t have driven while I was drunk. I may have a problem; maybe I should check out one or two AA meetings.” The alcoholic, when released from jail, looks around and says with great certainty, “I know I’m not an alcoholic, but clearly I shouldn’t have taken Sunset.” The former’s uncertainty may well get him to a meeting, while the latter’s certainty may well block him from attending a meeting.

When Certainty is Certainly Wrong

Throughout time, people have been absolutely certain – and absolutely wrong – about so much: the sun revolves around the earth, the earth is flat, gravity doesn’t exist (and yet the keys still fall), man will never fly, man will never go to the moon, it’s impossible for a human to run a four-minute mile, etc. Without regard for our certainty, each of those things were proven wrong, but more slowly than if people had been less certain. 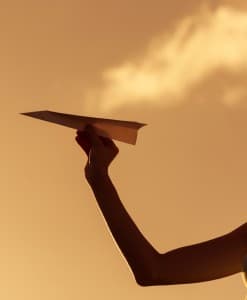 The topic of certainty has even found its way into cartoons. I recently saw a cartoon of two snowmen. One said to the other, “You’re so certain that we were created by some higher being, but I’m just as certain we were created by the random accumulation of snowflakes – how can we decide who’s right?” And who can forget Wile E. Coyote’s certainty that this time things will be different: He’ll catch the RoadRunner and won’t get hurt in the process – yeah, right.

In my work as an End-of-Life clinician (hospice nurse), I’ve also watched certainty become the cause of separation between patient and staff. I was asked to perform a pain management consult on a male patient in his sixties who was dying from metastatic organ cancer. As a young man, he had committed murder and spent 30 years in the penitentiary as a result. Now, some 13 years after his release from prison, he was refusing all pain medication for his horrifically painful cancer. The reason for that refusal? He was certain that God was going to have him suffer for an eternity after he died – this was to be his punishment for committing murder.

Since he was certain that God was both judgmental and punishing, his solution was to refuse pain medication so that he might suffer sufficiently here. By enduring such agonizing pain, he hoped to somehow “balance the scales” and thereby avoid suffering for an eternity.

When an Attitude Becomes a Barrier

There are other barriers to recovery that spring from an attitude and posture of certainty. It’s possible that people may be certain that the Steps won’t work for them and, therefore, be unwilling to either work the Steps or explore what happens when they do work the Steps.

It’s also possible that people’s certainty that there is no God, no Higher Power, may keep them from developing a curiosity about and an openness to the idea of seeking God (remember – from Chapter Five – “God could and would if “sought” – not “if found”).

The ability to commence our conversations with others by saying, “I could be wrong, but is it possible that…” can be invaluable in creating unity and minimizing separation.-Jay WestbrookFinally, people in recovery who are certain that they will never drink or use again may be more likely to relapse. Why? Because if they are certain they will never drink or use again, then there is no real reason to go to a meeting today, to call a sponsor today or to do any Step work today. Why? Because they are certain they won’t drink or use today and the truth is that they are at the most risk of drinking or using when they don’t go to a meeting, don’t call a sponsor, and/or don’t do any Step work.

I hope this article helps make you aware of what a gift uncertainty can be…and what a liability certainty can create. The ability to commence our conversations with others by saying, “I could be wrong, but is it possible that…” can be invaluable in creating unity and minimizing separation. Letting go of black and white thinking, absolutes and certainty can go a long way in restoring our curiosity, explorative nature, playfulness, and teachability. Most importantly, it can help preserve our sobriety and recovery, and go far in healing relationships.

Bob Dylan wrote: “You’re right from your side. I’m right from mine. We’re both just one too many mornings. An’ a thousand miles behind.” How sad to lose at love, simply because of a rigidity created by being certain that one is right.

There’s a saying: “Being right [and being certain] is the loneliest place I know” – so true.