Why It’s Important to Find Your Own Community in Recovery

“If you are standing with other women in a circle and there is a woman standing alone in your circle’s vicinity – the thing to do is notice her, smile at her, move over a bit and say, ‘Hi, come join us!’ Even if she decides not to join your circle – even if she looks at you like you’re crazy – inviting her is still the thing to do. This advice is meant for both literal and figurative circles. Widen your circle. All the times.”  ~Glennon Doyle

Nearly two years ago, I stopped attending 12-step meetings. While it has been the most freeing and revolutionary aspect of my recovery, if I’m honest, there has been something missing: a community of recovering people. The kind of people who understand the struggles of recovery and provide the support of a shoulder to cry on or an ear to listen.

That’s the sad part about leaving 12-step groups; your so-called friends no longer want to hang around with you. It’s like you suddenly become radioactive. It felt as if most of them (but not all) have been so conditioned that they fear what might happen to them if they hang around with me – someone who realized they don’t need a 12-step program to recover.

I’m an anomaly. At least that’s what I believed until I created my own recovery community. 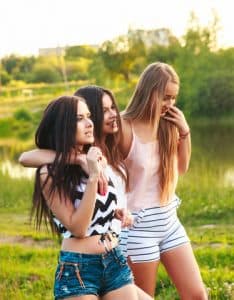 Determined to make a success of my new self-directed recovery, I’ve spent much of the last 18 months finding what works for me. That includes trying out a range of supportive tools, including therapy, Refuge Recovery, as well as taking better care of my health. The hardest part though, has been trying to build my own community. I won’t lie, it hasn’t been easy. But what transpired has been invaluable. I have developed a greater sense of self, and I’ve discovered the depth of my resilience. I recognize my newfound independence and value the quality of the community I’ve built.

Instead of accepting a community of people who I have only one thing in common with – using drugs – I now have a community of people that I am more able to relate to. These people are more personal, dynamic, and committed to personal growth. They include entrepreneurs, free thinkers and non-conformists, those who have overcome great traumas, healers, empaths, and fellow creatives. They also include a minority of people who practice a 12-step program.

Most powerful about my community is that they understand what it’s like to carve out a path that veers outside of the traditional 12-step trajectory. They don’t call me crazy for thinking outside the box and instead encourage me and celebrate my tenacity. When I’m struggling, instead of telling me to go to a meeting, they pick up the phone and empathize with my struggles. They don’t talk to me in language from an ancient text and instead use real life examples of how they overcame a similar experience.

What I particularly love about my community is that they remind me of what I’m capable of. They don’t tell me I need to pray or surrender my will. Instead, they tell me to dig deeper and access the source of strength that resides in me – not an elusive higher power or God.

As great as my community is though, they’ve been difficult to find. Approaching new people is like being back at school. And I hate being the new kid. I’ve dealt with more rejections than I wish to recount.

I’ve also had the added complexity of living on the west coast, where I’ve had to learn the hard way that people say one thing, but mean another thing entirely “Sure, I’d love to hang out,” they say. This actually means “You’d like to hang out? Oh, let me think about that for a second…no. I’m not in the market for new friends, I have enough of my own. Goodbye.”

I’ve also been at many local recovery events where I felt like an outsider. The reality is that I live in a place where it’s difficult to make friends. Especially as the majority of Portlanders don’t want more transplants – we’ve taken over their precious city. And there’s no avoiding the fact I’m not from around here with my English accent.

The act of introducing myself to groups of people and being rejected – because I don’t attend meetings, or I have a funny accent, or am an outsider – has been really disheartening. So, I’ve had to do what I do best: regroup and try something different. 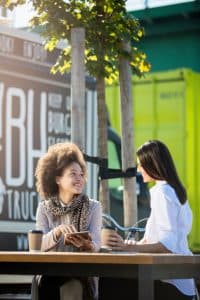 I took to the online recovery community. Through Facebook, I’ve met hundreds of women who are part of online communities – like the She Recovers community and the community of people who follow my writing. She Recovers welcomes women in all types of recovery, who utilize numerous pathways. When I’ve needed community support, I just need to reach out to these women and I almost immediately feel connected. I’ve been heard, understood, and supported. Some of these women have even checked in on me several days later.

I was fortunate to attend She Recovers in New York last year, and most recently in LA this year. I was able to hug the hundreds of women I’ve shared these intimate moments with online. I spent quality time with friends that I made in New York and I made new friends. I’m confident that I’ll continue speaking to these women in years to come…because they mean what they say.

What I particularly love about this community is that standing among them I feel like I belong. I am welcomed with open arms. None of us had any qualms about travelling there on our own or walking up to a woman with a She Recovers lanyard and introducing ourselves. I was met with a warmth and sense of knowing the path these women have walked. I didn’t think twice about putting my arm around a woman to comfort her when she sobbed throughout a talk. While I appreciate the great privilege I’ve had to be able attend these events, I felt this was something that could be replicated locally.

Building a New and Inclusive Space

Feeling encouraged by my experience at She Recovers, I decided to build a new community of recovering women-identified people in Portland. We held our first gathering last week, sharing home-cooked food and stories of recovery. We spent a good hour discussing how we want our group to look. From my experience and struggles of trying to build community, I want to provide as inclusive as space as possible. I don’t want another woman to feel like she’s on her own because of how she recovers or identifies. It’s vital to our recovery.

“Connection is as vital to the human experience as air or water. Without it something inside of us dies. We need connection with our community, loved ones, ourselves and our purpose. This is our reason for being here. When we lose connection, we lose ourselves.”