Word Games and Solving Your Own Recovery Puzzle

Learning how to manage a drug addiction, whether one of your own or someone you love, is a complicated challenge to navigate. But what about using a puzzle to help solve that mystery?

Researchers have recently recognized the power of puzzles in helping individuals manage their addictions. Scientists have already identified some common abnormalities that are present in the brains of addicts. Now, they think those abnormalities could be reconstructed to form healthy neural pathways through the mental exercise provided by puzzles.

So far, research that shows a correlation between increased cognitive abilities and decreased drug addiction has only been done in mice. In this experiment, one group was given a cognitive training program (think puzzles) while the other group of mice were kept in cages with restricted activity.

After one month, both groups were released in front of two boxes that they could enter. The preferences of each mouse were observed and noted, then the researchers attempted to alter their preferences. They did so by offering the mice cocaine that could be found in the box that each mouse did not prefer.

As it turns out, most of the the mice that received the cognitive training program did not change their minds. Despite being offered cocaine, they did not alter their courses nearly as much as the mice that had been on restricted activity prior to being released. 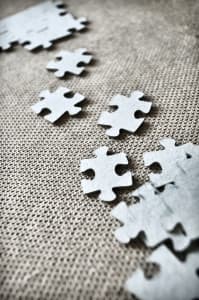 The implications of this study tell us that taking some time to prime our brains through puzzles – like crosswords and Sudoku – could make us better fit to manage our own addiction recovery.

As we know, not everyone who recreationally uses drugs, like cocaine, will ultimately become addicted. Curious to figure out why that is, scientists examined drug use among addicts and compared that data to the users who did not become addicted. In comparing the brains of addicts vs users, they discovered a physical difference in the frontal lobe of the brain – an area of the brain connected to executive functions like self-regulation and making decisions.

Using Tools to Your Advantage

Scientists believe these findings to be very encouraging, as they indicate a possible way to fight addiction.
If those of us who become addicted to drugs typically have smaller frontal lobes that prevent us from regulating self-control and decision-making, then perhaps a treatment can be developed that targets the development of this part of the brain.

And if such a treatment involves taking simple steps like introducing more puzzles into our daily lives – activities that help our brains to grow new and healthy neural pathways, then it’s possible we can regain control of our lives and leave our dependence on drugs in the rear-view mirror.